Beyond the Martial Empire and within it, the threat of war looms ever larger.

Helene Aquilla, the Blood Shrike, is desperate to protect her sister's life and the lives of everyone in the Empire. But she knows that danger lurks on all sides: Emperor Marcus, haunted by his past, grows increasingly unstable and violent, while Keris Veturia, the ruthless Commandant, capitalizes on the Emperor's volatility to grow her own power--regardless of the carnage she leaves in her path.

Far to the east, Laia of Serra knows the fate of the world lies not in the machinations of the Martial court, but in stopping the Nightbringer. But in the hunt to bring him down, Laia faces unexpected threats from those she hoped would help her, and is drawn into a battle she never thought she'd have to fight.

And in the land between the living and the dead, Elias Veturius has given up his freedom to serve as Soul Catcher. But in doing so, he has vowed himself to an ancient power that demands his complete surrender--even if that means abandoning the woman he loves.

There's a revelation about one character's identity which ended up feeling very anticlimactic for me, as I'd guessed it when I read the first book. It felt a bit like nothing else would have made sense. That's good, since it means the writing up until the reveal completely supported the revelation and was reliably telegraphing the direction of the story. It reinforced a feeling of frustration with how this character does things and why, while also not adding much in the moment.

This continues some things left hanging from the second book, and the things it wraps up are interesting but don't feel as emotionally significant. As the third book of four, it moves a lot of things into place which seem like they'll be critical for the final book. Book one was slavery and escape, book two was a months-long journey culminating in a rescue attempt, but this third book focuses more on trying to make certain bad things not happen. Best case, it's a holding action, worst case it's a series of disasters, and either way it ends feeling strange. Laia and her brother are working with a new contact to make weapons and get those weapons into the right hands, but not everyone agrees over what the right hands are. Helene is trying to keep her pregnant sister alive, and to foil the Commandant wherever she can. Elias is learning his new role in the Waiting Place, finding out just what that entails and how much it will distort his original humanity. The pregnancy and the weapons-making are almost new storylines, but they did have their start at the very end of the second book. Laia, Elias, and Helene are the main narrators, with brief appearances from the Nightbringer at the beginning and end of the book. Their voices are consistent with the previous books, while feeling distinct from each other.

Several things are left hanging for the final book to address, including but not limited to Elias's and Laia's fates, the devastation of the cities, and the final stages of the Nightbringer's plan. I can't think of anything major that was both introduced and resolved. Most of the important things were at least mentioned as possible plans in the second book. It leaves this murky feeling that this book is essential for the overall arc of the series, with several extremely important moments within it, but the ebb and flow of the story itself feels very forgettable.

It would not make sense to start with this book and not have read either of the others. This is a narrative bridge to get from the second book to the finale, it's full of revelations and secrets which have lingered for a while. Once those things are brought to light, the characters can act on them in the final book, but encountering them here as the introduction would feel largely pointless. There's worldbuilding for the Mariners, who haven't appeared until now, but other than that a lot of the background is carried over from the first two books and only lightly re-explained.

The main plot is a tangle of overlapping threads, making of them picking up on things begun earlier, then culminating in one hectic night which synchronizes them in time but not necessarily in theme or purpose. Helene's story is the strongest for me, with clear goals, a specific enemy, and where it's easy to tell if she fails (if her pregnant sister or the forthcoming baby die, that's a problem). Elias is trying to find out how to do the seemingly impossible task of helping all the ghosts move on, and his path towards that answer is full of a lot of back and forth, exiting and re-entering the forest of the Waiting Place. Laia's goals keep changing, as she wants bad things not to happen and good things to happen, but is having trouble figuring out what bad she's willing to accept in defense of which good. Given that the world isn't perfect (and her particular slice of it is filled with a bunch of people willing to do a whole lot of murder for their own goals), that indecision is giving her trouble.

Overall this feels necessary to the arc of the series while being largely forgettable for long stretches. There's a lot of places in the middle where it feels like it's repeating an emotional beat that already happened, or drawing out something for way too long. The end is very strong and I like the story overall, but it's not my favorite in the series so far. 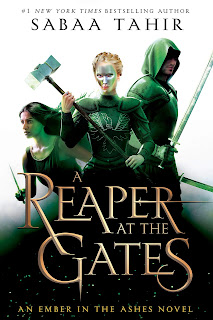