Mercy has friends in low places--and in dark ones. And now she owes one of them a favor. Since she can shapeshift at will, she agrees to act as some extra muscle when her vampire friend Stefan goes to deliver a message to another of his kind. But this new vampire is hardly ordinary--and neither is the demon inside of him.

When the undead and the werewolves sent to find him don't return, the local vampire queen turns to Mercy for help. A coyote is no match for a demon, but Mercy is determined to get her friends back--including the two werewolves circling around her heart.

BLOOD BOUND draws Mercy into vampiric machinations when Stefan requests her as an unassuming witness during a visit to a strange vampire.

This does more worldbuilding for the vampires and the fae, similarly to how MOON CALLED focused on werewolves and had a secondary focus on the vampires. Sometime between the first book and this one the werewolves went public to a limited degree, and there's a minor side plot which involves this change.

I don’t think this specifically wraps up anything left from the first book. It focuses on Stefan and the vampires who were introduced in MOON CALLED, and features many returning werewolves as well as a few new ones. The main antagonist and his murder spree is introduced and resolved in this book. I know from having read further in the series that it leaves something for later, but the actual text doesn't do anything to indicate it at the time. It does have hints of a series-long tangle of some kind surrounding Mercy’s love life. Mercy is still the narrator, with a very matter-of-fact style and a decent amount of insight into werewolves. It could make sense to start here, since most of the vampires are new in this book, but it would be better to have read MOON CALLED first.

The plot involves a strange vampire and various attempts to stop him from killing indiscriminately and leaving ancillary violence in his wake. This book still feels like it's setting up the world and getting things ready for something big later. We're also introduced to Mercy's ability see and (sometimes) speak to ghosts, which is part of her abilities as a walker. This one has never been my favorite, as it feels like it's still moving pieces around and isn't nearly as good as some of the later books. I think part of why I dislike it is that (other than what Mercy borrows) it feels utterly inconsequential within the main series after it's been read once.

Not terrible, not my favorite in the series, this one feels like a bottle episode (which is a weird vibe for the second book). 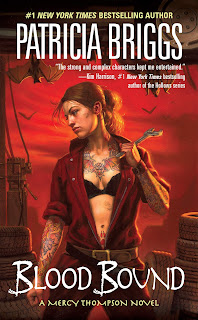