El Diablo is in the details in this Latinx pirate fantasy starring a transmasculine nonbinary teen with a mission of revenge, redemption, and revolution.

On Mar León de la Rosa’s sixteenth birthday, el Diablo comes calling. Mar is a transmasculine nonbinary teen pirate hiding a magical ability to manipulate fire and ice. But their magic isn’t enough to reverse a wicked bargain made by their father, and now el Diablo has come to collect his payment: the soul of Mar’s father and the entire crew of their ship.

When Mar is miraculously rescued by the sole remaining pirate crew in the Caribbean, el Diablo returns to give them a choice: give up their soul to save their father by the harvest moon, or never see him again. The task is impossible–Mar refuses to make a bargain, and there’s no way their magic is a match for el Diablo. Then Mar finds the most unlikely allies: Bas, an infuriatingly arrogant and handsome pirate–and the captain’s son; and Dami, a gender-fluid demonio whose motives are never quite clear. For the first time in their life, Mar may have the courage to use their magic. It could be their only redemption–or it could mean certain death.

THE WICKED BARGAIN follows Mar after they survive the storm which (at El Diabolo’s seeming behest) kills their father and his crew when the terms of his bargain with El Diabolo concludes. Mar is picked up by a different pirate ship and works to conceal their magic as they become closer with the captain’s son, Bas. They have a few months to make a deal with El Diabolo or lose their father forever, but then a demonio named Dami shows up and offers another way to make a deal. As time runs out and the pirates run into trouble, Mar must figure out how to accept their own magic. I’m extremely happy this this has a nonbinary main character and no gender-related moment where someone else “catches” them or “figures out” something based on their body. There are scenes which emotionally have some similarities in terms of the danger of discovery and uncertainty about the other person’s reaction, but they’re all related to Mar’s magic rather than their body or gender.

The worldbuilding has a degree of specificity which is enough to place it in history (with the addition of magic) but generally avoid infodumping. It is in a particular time and place (the Caribbean in 1820), but what matters emotionally to Mar is their personal timeline and recent tragedy. There’s frequent use of Spanish, enough to make the characters fluently multilingual without making the text difficult for readers (like myself) with little to no understanding of Spanish. It seemed like anything of importance to the plot was either slightly paraphrased in English after the Spanish portion, could be inferred from other characters' reactions, or took the form of small words and phrases intermingled with otherwise English sentences and were understandable from the surrounding context. The important thing from all that is that the characters’ speech supports the other forms of worldbuilding to create the setting and feel.

The first half is pretty good, but this comes alive in the second half as the setting changes and the dangers became more concrete. Mar is tense from almost the start, but it takes a while for them to open up enough to explain why they're afraid of more than just discovery when it comes to using their magic. Mar's rapport with Bas takes a long time to build, though they interact frequently because Mar kind of becomes Bas's assistant. Their early interactions with the demonio, Dami, are even more strained because Dami is trying to get Mar to do several things they refuse to even consider (to use more magic and to make a deal). How much I liked each of them tracked pretty closely with how Mar's feelings changed towards them, as initially annoying interactions made more sense when additional context was provided. 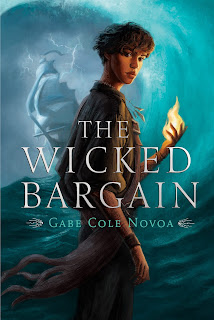