Set in a terrifyingly brutal Rome-like world, An Ember in the Ashes is an epic fantasy debut about an orphan fighting for her family and a soldier fighting for his freedom. It’s a story that’s literally burning to be told.

LAIA is a Scholar living under the iron-fisted rule of the Martial Empire. When her brother is arrested for treason, Laia goes undercover as a slave at the empire’s greatest military academy in exchange for assistance from rebel Scholars who claim that they will help to save her brother from execution.

ELIAS is the academy’s finest soldier— and secretly, its most unwilling. Elias is considering deserting the military, but before he can, he’s ordered to participate in a ruthless contest to choose the next Martial emperor.

When Laia and Elias’s paths cross at the academy, they find that their destinies are more intertwined than either could have imagined and that their choices will change the future of the empire itself.

The worldbuilding leans on characterization and brutality, with few aesthetic descriptions. The major groups are the Scholars, the Tribes, and the Martials, with the Rebels generally composed of Scholars who are trying to resist the Martials. There are a few other groups mentioned, but they weren't major players in this first book, and at a certain point it matters more whether someone is a Mask, slave, Augur, or part of the Resistance. I like books which are full of plans and political tensions over scenery, so I enjoyed this emphasis on individuals and factions.

For those who enjoy love triangles, this has an innovation on the form: Laia and Elias each have two people to choose between. As the protagonists they're of course drawn to each other, but Laia has a smoldering attraction to one of the rebels, and Elias is slowly realizing he might have romantic feelings for his best friend (the only female Mask in his generation). These tensions aren't completely resolved in this book either, leaving room for this to develop more in the next one. I like both options for each of them, and it feels like there's a genuine question over what they'll choose. For those who are a little less into such plots, it's a consistent but not overwhelming thread and there's plenty else to like. I'm not even totally sure that the series plans for them to each end up with anyone.

The plot begins with Elias and Laia on two sides of the same raid, where Laia's grandparents are killed and her brother is kidnapped, while Elias is one of the Masks carrying out the invasion. The chapters frequently overlap, with each narrator sometimes beginning their chapter by telling their perspective on an event or a slice of time which was just told by the other. Since they generally have completely different experiences, I like this overlapping style but it took a little getting used to. It made it feel more like they were each narrating what was important to them, uncaring and unknowing of what the other described. Laia asks the Rebels for help getting her brother back, and is placed as a slave to the Commandant of the Academy where Elias is. Elias was planning to escape, but is told by an Augur that the only way to actually be free is if first he stays. The rest of the story unfolds as Laia tries to get information to the rebels and survive her enslavement, while Elias tries to survive the gauntlet of challenges to be the next emperor (a title he doesn't even want).

One thing I appreciate about this book is that in a system so controlling and overseen by (basically) mind-reading (probably) immortal Augurs who never explain their own goals, it would make very little sense for the heroes to have genuine agency over their lives at a macro level. So they don't. They don't have control over how things will go, their plans keep working out very differently than they even dared to hope, and they frequently suffer for it. They're constantly in danger and often get hurt, Laia from the Commandant's whims or Elias from the challenges themselves. When things do go well, an Augur usually turns up to tell Elias how he's done what they wanted, yet again. It's frustrating but completely in keeping with the brutality and sheer mind-fuckery of the situation. Because they have so little control, most of the plot focuses on how they feel and what they decided to do in the small moments they do have.

I enjoyed this and plan to read the rest of the series, this is an exciting and well-paced beginning to the quartet. 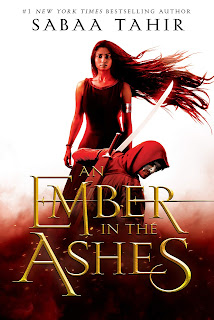