The Bone Houses by Emily Lloyd-Jones

Seventeen-year-old Aderyn ("Ryn") only cares about two things: her family, and her family's graveyard. And right now, both are in dire straits. Since the death of their parents, Ryn and her siblings have been scraping together a meager existence as gravediggers in the remote village of Colbren, which sits at the foot of a harsh and deadly mountain range that was once home to the fae. The problem with being a gravedigger in Colbren, though, is that the dead don't always stay dead.

The risen corpses are known as "bone houses," and legend says that they're the result of a decades-old curse. When Ellis, an apprentice mapmaker with a mysterious past, arrives in town, the bone houses attack with new ferocity. What is it that draws them near? And more importantly, how can they be stopped for good?

Together, Ellis and Ryn embark on a journey that will take them deep into the heart of the mountains, where they will have to face both the curse and the long-hidden truths about themselves.

Ryn is a gravedigger near a forest filled with "bone houses", walking corpses which have stayed in the forest and away from village... until now.

Ryn is trying to make ends meet in a town where the dead aren’t staying buried and older folks are turning to cremation. Ellis travels to her village on his way to get answers about his past. It turns out they may be the solution to each other’s problems, and together they journey through the forest into the mountains.

The worldbuilding treats all explanations as being needed by someone who is familiar with the setting, generally, but not the specific local history and current undead menace. This means all exposition feels grounded in the world without being overwhelming. However, wile the worldbuilding is specific (inspired by Welsh folklore), it isn't very deep. It gradually incorporates stories of what happened nearby decades ago as Ryn and Ellis are traveling, but a lot of details are only lightly referenced. I love books focused on conversation and banter, and I don't mind the sketchy worldbuilding, but this turns the mood from travel companions into a romance at almost the final moment, which was disappointing. It's not enough chemistry to be satisfying if I want a book with romance, and too much of one if I just want a guy and a girl to be friends without being paired up. There's an animal sidekick, which is not a trope I enjoy, but at least this one kept leaving for long stretches.

The story takes a while to get going, spending a lot of time initially in the village with Ryn and her siblings. It smoothly incorporates Ellis's arrival and various interactions with the local noble who is making Ryn's life hell by demanding her house as payment for her missing uncle's debts. Ellis is a mapmaker, and eventually he and Ryn leave on a cartographical expedition after the village is attacked by bone houses. Once they do leave, it's a cycle of traveling (leaving the goat behind for plot reasons), sleeping, then interacting with someone or something and then the goat catches up again. It felt predictable (in fact I guessed at least three major twists before they happened, along with a smattering of minor events), but in a way that might end up feeling comforting on a re-read.

I love this take on zombies, and I enjoyed the characters separately but don’t think they have much chemistry together. A good book, but not a great one. Read this for a journey story about loss, letting go, and living afterward. 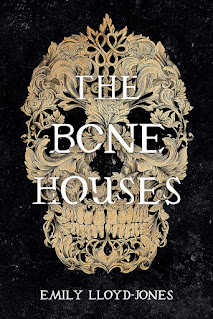