When Tennal—a rich socialite, inveterate flirt, and walking disaster—is caught using his telepathic powers for illegal activities, the military decides to bind his mind to someone whose coercive powers are strong enough to control him.

Enter Lieutenant Surit, the child of a disgraced general. Out of a desperate need to restore a pension to his other parent, Lieutenant Surit agrees to be bound to Tennal and keep him conscripted in the army, a task that seems impossible even for someone with Surit's ability to control minds.

Tennal just wants to escape, but Surit isn’t all that he seems. And their bond may just be the key to their freedom.

OCEAN’S ECHO is the mind-control version of a forced marriage/fake dating plot… in space. It’s fantastic.

Tennal doesn’t want to be synced, Surit is affronted by the very idea that he’d be forced to mentally link for life with someone who’s unwilling. Together they hope to pretend the sync worked and fake it long enough for Tennal to get away and for Surit to keep his military career intact. The political intrigues are complex enough to imply a great deal of other stuff that’s happening while reducing the pieces Tennal and Surit have to track into a relatively small list.

I love Tennal and Surit, they make a very interesting team. Tennal is an absolute mess, and Surit is grounded in a way that lets him notice Tennal’s antics without getting bowled over. The course of their relationship is affected early on by the circumstances of their meeting just as much as it is by their personalities, something which continues to matter right until the end of the book. It’s a character-focused story, centering their reactions to what’s happening whether or not one of them was the catalyst. They’re frequently buffeted by someone else’s moves, piecing together what’s going on and why while the adjust their course. It means that even though there’s a lot happening other than their relationship, everything is filtered through their processing of events, singly or together.

Though technically not a sequel, this is in the same universe as WINTER'S ORBIT. The main way this matters is they share a galactic convention for gender-markers by way of jewelry material. Someone could read them in either order or even just read one or the other and have everything make sense.

The ending leaves open the possibility that they’ll show up in later books, tying off major and minor plot threads so that this is a complete story on its own while giving an indication of what they’ll do next. 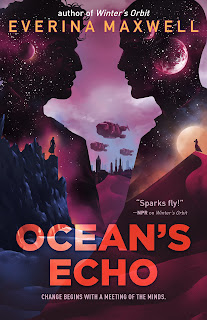