Velasin vin Aaro never planned to marry at all, let alone a girl from neighboring Tithena. When an ugly confrontation reveals his preference for men, Vel fears he’s ruined the diplomatic union before it can even begin. But while his family is ready to disown him, the Tithenai envoy has a different solution: for Vel to marry his former intended’s brother instead.

Caethari Aeduria always knew he might end up in a political marriage, but his sudden betrothal to a man from Ralia, where such relationships are forbidden, comes as a shock.

With an unknown faction willing to kill to end their new alliance, Vel and Cae have no choice but to trust each other. Survival is one thing, but love―as both will learn―is quite another.

Byzantine politics, lush sexual energy, and a queer love story that is by turns sweet and sultry. Foz Meadows' A Strange and Stubborn Endurance is an exploration of gender, identity, and self-worth. It is a book that will live in your heart long after you turn the last page.

“Stolen me? As soon to say a caged bird can be stolen by the sky.”

A STRANGE AND STUBBORN ENDURANCE is one of my favorite things I’ve read all year, in a year where I’ve already read more than two hundred books. It might be my favorite arranged/political marriage book, if it’s not the winner it’s at least in good company. It’s instantly achieved the rank of my favorite fantasy book dealing with rape (a strange category to have, but as I make a podcast dealing with fictional depictions of trauma, an almost necessary category to be aware of).  If you’re uncomfortable with that content, please choose another book, with my best wishes, as this deals with the actual event and long aftermath of a (graphic but brief) sexual assault by someone who until very recently was the victim’s romantic partner.

There are two major countries, one of which is barely shown but heavily felt (Ralia), and the other is where almost all of the story takes place (Tithena). That means the reader's main understanding of Ralia is through Velasin's recollections and Tithenai gossip. The story's focus on Velasin's arranged marriage to a man, combined with Ralian homophobia, means that most descriptions of Ralia are unflattering, focusing on much that Velasin was unable to freely do in his former country. Most of the story is set in Tithena, in or around Caethari's home (now Velasin's new home). This allows the opportunity for both the official Tithenian line and the reality to appear side by side in a way that doesn't happen for Ralia. It makes it clear that even though Tithena is more egalitarian in many respects,

Velasin and his soon-to-be husband, Caethari, are the two narrators. I love Velasin and Caethari, both separately and together. However, unlike most books with dual narrators, this gives each narrator several chapters in a row before switching to the other. This helps with immersion into each man's perspective, and means that in this emotionally fraught story based on a colossal and nearly catastrophic misunderstanding, the reader doesn't get an immediate narrative resolution merely by switching to the other person. They're very different people, something which really gets to shine when Velasin gets more comfortable and begins turning his people skills and political mind to the mystery at hand.

We meet Velasin on the road, almost immediately reaching his father's home after fleeing his unfaithful partner (and accompanied by Markel, his servant and friend). Upon his arrival he's notified by his father of his impending arranged marriage to a Tithenai woman. Moments later his former partner arrives, having pursued him, then assaults him. After his father and the Tithenai envoy walk in on them (not understand that it was rape), the envoy offers him a marriage to a man instead. He accepts with as little consent as was involved in the former arrangement, and then travels to Tithena, where the rest of the plot unfolds.

Markel is Velasin's servant and best friend. He's mute, using signs, writing, and other non-verbal signals to communicate with Velasin (and anyone else who'll learn). I like Markel, and he gets a lot of space in Velasin's thoughts, but not quite as much in the actual narrative (as he spends much of it recovering from a very serious injury). He's very important to the story, playing much more of a role before he's attacked and after he's mostly recovered.

Caethari wasn't expecting to be the one getting married, since Ralia's endemic homophobia is well-known in Tithena. Tithenia as a country is so casually queer that saying it's more accepting of queerness than Ralia does a disservice in the comparison. It is not, however, free of other problems. Before Caethari can greet Velasin, the incoming party is attacked and their introduction is made under rather stressful circumstances.

The rest of the plot weaves together a series of strange and possibly politically-motivated attacks, investigations of the same, Velasin's internal struggles, Caethari's attempts to help, and many long conversations about cultural differences which range from extremely serious to mere curiosities. There's also the lingering threat that Velasin's attacker might pursue him further, a (not unfounded) worry which complicates his recovery. I was a bit overwhelmed by the sheer number of characters, but I'm generally terrible with names and was still able to track most of what was happening. Much of the narrative is structured like a mystery, where they're trying to figure out the person or group behind the attacks and don't know who they can trust. This is interwoven with Velasin and Caethari getting to know each other, and Velasin's introductions to Caethari's family and a few other important persons.

Read this for a kind of mystery story, full of political machinations, focused on recovery from trauma in a situation where bad things are still happening.

Author's Note: "A Strange and Stubborn Endurance contains on-page depictions of rape, suicidal ideation, and self harm. While the narrative is one of healing, readers should nonetheless be aware of this content in order to engage with it on their own terms." 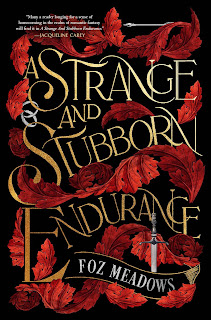