Picking up just a few months after A Reaper at the Gates left off...

The long-imprisoned jinn are on the attack, wreaking bloody havoc in villages and cities alike. But for the Nightbringer, vengeance on his human foes is just the beginning.

At his side, Commandant Keris Veturia declares herself Empress, and calls for the heads of any and all who defy her rule. At the top of the list? The Blood Shrike and her remaining family.

Laia of Serra, now allied with the Blood Shrike, struggles to recover from the loss of the two people most important to her. Determined to stop the approaching apocalypse, she throws herself into the destruction of the Nightbringer. In the process, she awakens an ancient power that could lead her to victory--or to an unimaginable doom.

And deep in the Waiting Place, the Soul Catcher seeks only to forget the life--and love--he left behind. Yet doing so means ignoring the trail of murder left by the Nightbringer and his jinn. To uphold his oath and protect the human world from the supernatural, the Soul Catcher must look beyond the borders of his own land. He must take on a mission that could save--or destroy--all that he knows.

This is a mediocre conclusion to what promised to be a great series. It long, slow, and boring, with repetitive angst and worry from characters who keep choosing to delay happiness on offer until right before it gets taken away. This then makes them feel like any happiness they do get will be temporary, and then they delay longer the next time. Once or twice was interesting, but it happens over and over to the point of being predictable. The only couple who actually get a happy ending is one where one of them has technically already died. The Nightbringer was way more interesting as Keenan, and I kind of wish that they had either been two different characters, or that the series had waited longer to reveal his real identity. Being an enemy who's over a thousand years old doesn't actually have to remove a character from being in the running in a love triangle (as most vampire books can attest), but this series seems to have resolved its various relationships by killing off family, friends, partners, and potential love interests seemingly at random. I have no problem with books killing off characters, but the way their vibrancy and uniqueness was bled away before most of the deaths contributed to the dull feeling of this whole book.

I like Elias/The Soul Catcher as a character, and he does the best he can with his magically-induced memory loss. I don't like how that memory loss comes in and out on the whims of a different supernatural being, as it takes coincidence and turns it into something that's explicitly another character's decision to take away Elias's choices and leave him with the Soul Catcher's cold resolve.

It doesn't feel like Laia learned anything, she grows the least of any of the characters and I found her chapters to be very frustrating. Helene adapts to her situation and changes much more, but her character growth tended to come a hair too late to save the ones she loves.

Throughout the series, The Nightbringer is turned from this intense rebel as Keenan into this angry being who can't be reasoned with and doesn't seem to have retained any of the lessons he had the opportunity to learn as Keenan. Laia hangs on to the memory of him, and that serves to hold her back rather than to build the Nightbringer as a villain. He and the Commandant get specifically turned into understandable people by the end in ways that feel way too timely and convenient.

Most of the new worldbuilding is related to the mysterious Storm, but even that was more confusing than interesting. It takes so long to get any new details that by the time I got answers I'd lost most of my interest in the questions. Reading this series is a slow slide from a really intriguing start into a bunch of angst, wishing, and churning the same regrets over and over. It feels like a huge chunk of the third book should have been excised, as well as a bunch of this one, and combined the remaining portions of both books to make this a trilogy rather than a quartet. Collectively, they're padded with indecision, people refusing to help, Elias and Laia worrying about the same things over and over again, and people waiting for other things to get worse before they can do anything. A bunch of characters have information but are either barred from conveying it or just refuse to do so for unexplained reasons. A lot of the momentum is lost by Elias losing his memory and getting access to bits of it again. War is often boredom punctuated by death and terror, but I wasn't expecting 80% of the book to be boring to match it. I only made it through as an audiobook because I could zone out occasionally but still get through it. As much as I loved the first two books, by the time I was a third of the way through this one I just wanted it to be over.

There’s also an instance where a character who died in the third book turns out to be alive and plays a key role in the final big battle. They come out of nowhere, and feels so out of place that other characters question them to try and understand how they’re actually alive. They show up at exactly the right time to do one more thing, and then their presence is the solution to another problem (but they could still have been the solution if they had actually died when originally thought).

The audiobook narrators did a great job with this whole series, they made this boring and seemingly endless story bearable.

As the final book in the series, this wrapped up hanging threads from the previous books, but it tended to do so by killing off interesting characters once they'd been reduced to having no characterization beyond being an ally, family member, or potential love interest to the main characters. This tried to have a new storyline with the Storm and the reveal of the Nightbringer's big plan, but his big plan isn't very detailed and mostly is a roundabout way of burning the world down. Technically this resolves the question of whether Laia and Elias will end up together, but they spent so little time actually building a relationship that even that feels lackluster. Character memory loss doesn't have to steal opportunities for relationships! But pairing that memory loss with a "no attachments, no emotions" persona just wrecked their chemistry for me, since Laia spent a while with no reason to believe that Elias would return to himself or remember her in a meaningful way, or that he could even return to humanity and leave his duties if he did. It's a book, so of course her pining happens to work out, but I don't like how that was handled.

It would not make sense to start here. It's a very long wrap-up of better stories begun elsewhere, and can't stand on its own.

I don't have a great sense of the plot. They need to figure out the Nightbringer's plan and figure out how to stop him and the Commandant, and they manage to get that information somehow out of beings who knew it but either couldn't or wouldn't give it earlier. All of this takes way too long. For an ending I endured so much book to receive, it resolved so neatly as to feel cheap, which is not how I want to feel about these characters. 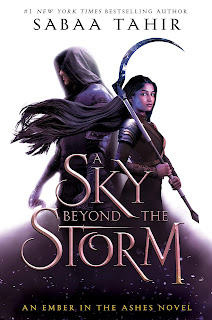