Our shift to bi-monthly episodes is complete! You'll get two podcast episodes per month going forward. The plan is loosely that Patrons will receive episodes on the first and third Mondays, with the public release of those same episodes on the second and fourth Mondays. This will have some variation, especially when the first Monday is a day or two into the month.

The pivot to focusing on reviews of completed series is going well! I've made a tag for books I'm planning to review in this manner (linked here), please feel free to peruse the list and suggest what I should prioritize. Some stand-alone books will be filler between reviews of series, but Sunday and Friday should be series where either I review the whole thing or I review until something happens and I DNF the series for good.

We now have people asking us to mention their stuff in our stuff, which is an exciting development! I'm tucking it into this section so you can find it easily, this time it's a free thing that's coming up! You may recall my review of RESCUED BY THE MARRIED MONSTER HUNTERS by Rook Bird, posted back in 2021. As a Halloween promotion, the ebook will be free from October 29th to the 31st at this link.

I didn't finish TALON by Julie Kagawa, I wanted more dragons and less teenage drama, also one member of the love triangle is an adult while the other two are teenagers.

I mentioned last time that I didn't finish THE DRAGON REPUBLIC by R.F. Kuang, here's that DNF review.

I tried and almost immediately stopped reading THE BRILLIANT DEATH by A.R. Capetta.

A new month, a new Seanan McGuire Patreon story, this newest one is in the Incryptid series and I enjoyed it. Since it's not only not a full book but not officially published it doesn't get a full review.

NIGHT SHIFT has stories by Nalini Singh, Ilona Andrews, Lisa Shearin, and Milla Vane, and is Fantasy marketed as Adult. Various characters find more than they anticipated when something changes after dark. Told in an Anthology with multiple POV styles. I liked three out of four, I was reading it in connection with the Kate Daniels Books.

GLORIOUS FIENDS by Bonnie Jo Stufflebeam is Horror, with queer character(s), marketed as Adult. Roxanne resurrects her deceased best friends, then the Guardian of the Underworld demands that she replace them with three equally nefarious creatures. Told in Third Person with Single POV.

MAGIC BREAKS by Ilona Andrews, book 7 of Kate Daniels is Urban Fantasy, with queer character(s), marketed as Adult. Kate is called to a gathering which is interrupted by the news that one of the Masters of the Dead was murdered by a shapeshifter, and she has less than a day to find the killer. Told in First Person with Single POV. This was originally going to be the final book but then they were contracted for three more.

THE SCRATCH DAUGHTERS by H. A. Clarke, book 2 of Scapegracers is Fantasy, with queer character(s), marketed as Young Adult. Sideways Pike needs her specter back, but going after Madeline and the Chantrys for what they each did gets complicated. Told in First Person with Single POV. We previously interviewed H.A. Clarke before their name update.

CITY OF MASKS by Mary Hoffman, book 1 of Stravaganza is Fantasy marketed as Young Adult. Lucien holds a book at night in his England home and finds himself transported to Talia, a strange version of Italy where his cancer seems to not reach him. Told in Third Person with Ensemble POVs.

MAGIC SHIFTS by Ilona Andrews, book 8 of Kate Daniels is Urban Fantasy, with queer character(s), marketed as Adult. Kate and Curran are newly separated from the Pack, trying to focus on Cutting Edge, when Eduardo goes missing and they have to dig into the Mercenary Guild. Told in First Person with Single POV.

I think I managed to make all my re-reads be books I've read before but not yet reviewed. I've been reading ahead and drafting reviews so this can publish steadily through the holidays, which means that even though I started re-reading the Song of the Lioness Quartet by Tamora Pierce last week, you won't get those reviews until January.

For 2022 I'm hosting a reading challenge that lasts the whole year. October's prompt is to read something by an Asian author. Our patrons voted for GIRLS OF STORM AND SHADOW by Natasha Ngan.

My re-read of PORTRAIT OF A THIEF by Grace D. Li was slightly interrupted when it went back to the library but I have resumed.

I'm reading an ARC of THE WICKED BARGAIN by Gabe Cole Novoa. It's a queer pirate story with a nonbinary latinx protagonist and I'm having an excellent time!

I started INCENDIARY by Zoraida Córdova (audiobook narrated by Frankie Corzo), not sure how I feel about it yet.

STALKING DARKNESS by Lynn Flewelling is the second book of the Nightrunner series. I'll be reading the first several as audiobooks while working on a sewing project. I do intend to read the whole series unless something goes wrong, but I don't have audiobook access for the last part of the series. Ah well, taking them one at a time.

I've been staring at THE CITY OF DUSK by Tara Sim on my shelf since I got it as a present last year, and I'm finally reading it. I really shouldn't have waited. It's going extremely well, hampered only by the way that physically large books slow down my reading speed.

This time last year I read MALICE by Heather Walter, it's a sapphic sleeping beauty retelling from the evil fairy's perspective.

As for the podcast, hopefully you're enjoying our most recent episode, GIDEON THE NINTH by Tamsyn Muir, recorded with special guest S.T. Gibson, as well as the first half of our interview with author Seanan McGuire (AKA Mira Grant, A. Deborah Baker), released in January. If you'd like to receive the second (spoiler-filled) half of the interview, please consider supporting us on Patreon. Patrons receive this newsletter one week early, as well as a list of upcoming podcast episodes for the next three months. 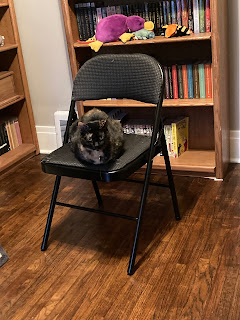