Set in Talia, a parallel world very similar to 16th-century Italy, the narrative follows Lucien, who in our world is very ill. Given a marbled notebook to use as a diary, the notebook is the unexpected means that transports Lucien to this dangerous new world; a world that thrills to the delight of political intrigue and where a life can be snuffed out with a flash of a merlino blade. The city of Bellezza (Venice in our world) is astonishingly evoked, with a filmic eye to detail, from the sensuousness of silks and velvets, to the thrill and danger of assassination attempts both and foiled and successful.

The world of Talia is unforgettably and convincingly real.

Lucien (Luciano in Talia) finds himself transported in his sleep to an alternate version of Italy, displaced in time and details from the one of his 21st century world. He has cancer in his own time, and losing sleep to exploring Talia saps his energy even more in a way that exercise in a cancer-free body can’t completely make up for. Arianna is a child of the islands, dreaming of being a mandolier (a role denied to girls), when the sudden appearance of Luciano disrupts her carefully laid plans. Later on she is accused of a crime, and only a set of well-kept secrets surrounding her birth are able to enable her rescue and transform her life in a way she never dreamed possible.

Rodolfo is one of my favorite characters, and I wish he hadn’t been put through so much possibly unnecessary stress. He handles it with aplomb, but he shouldn’t have had to and I’m a bit mad at Silvia for some of it.

Some of the narrators are antagonists, but they're shown such that their motivations (however despicable) are at least understandable. It's a subtlety which I appreciate, and it means that even characters I despise make sense within the story and I can guess what they might try.

This is set in an alternate version of Italy, one so fundamentally different that even silver and gold behave differently, but close enough in its history that Venice can be mostly navigated by someone who has recently spent their nights exploring Bellezza. I like the detail that Lucien explores Bellezza first, which prompts a secondary interest in Venice. It makes Bellezza feel real, centering the place where the story is set, rather than making this wonderful setting feel like a pale imitation by too frequent comparison.

The plot centers on Luciano and his friendship with Arianna, Rodolfo’s tutorship of Luciano, and Silvia’s political troubles with the di Chemicis who are trying to take over Bellezza. Once assassins become involved and Luciano’s otherworldly nature is known to nefarious players, these plot threads become inextricably linked in a riveting series of twists and reveals which are telegraphed just enough to make sense without feeling inevitable. Something which colors many of Luciano’s moments is the reality of his cancer, causing confusion and stress when his coma-like state during his journeys to Talia are mistaken for additional cancer symptoms by his worried parents.

End of book spoilers in this paragraph: I don’t think the ending is a magical cure narrative but I wouldn’t try to argue with someone who feels strongly that it is. If this feels like a magical cure to you then it's probably not a series you'll like, as the whole thing is a kind of wish fulfillment with young people travelling and then figuring out how to solve some of their problems with what they learned or what they did. As far as Lucien’s parents are concerned, he dies when they pull the plug after a strange several-week coma that he appears unable to awaken from. As for Luciano, he was kidnapped and rendered unable to travel home, only to rather dramatically have it revealed that he’s now stuck in Talia and any possible trips to his former home will be brief and difficult. He has the makings of a new life, one he loves even if he didn’t get to choose it, which makes any feelings of a cure bittersweet at best and traumatic at worst. 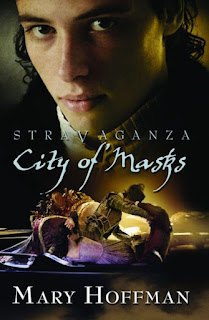