Dreaming of a city with flying horses was one thing... But coming face to face with someone she knew to be dead - that was something else again.

Georgia would love nothing more than to ride horses every day and avoid her annoying stepbrother at all costs. But she could never have guessed that a tiny, antique winged horse figurine would be the key to her escape to another world and another time. When Georgia arrives in a sixteenth-century city called Remora, she is plunged into a dangerous and treacherous world of horse-racing, family honour and deadly rivalry. And there, as a new Stravagante, Georgia will have a dramatic and extraordinary role to play...

Desperate to escape her step-brother's bullying at home, Georgia falls asleep holding a figuring of a flying horse and wakes up in the Talian stable where the real one was born.

The relationships are tangled in this one, with many of them established in the first book and appearing here with minimal explanation to continue where they left off. Most of the main characters from CITY OF MASKS make at least token appearances, with Luciano playing a major role.

Just like in the first book, CITY OF STARS cobbles together its plot by having distinct actions and motivations for a complicated cast of characters, coalescing around a city-wide event which involves them but is much bigger than them. In CITY OF MASKS it was the celebration with fireworks, and in CITY OF STARS it's the annual horse race. It lets threads such as Falco's stravigation, the flying horse, Georgia's troubles at home, the di Chimici's machinations, and Gaetano's impending proposal all come together because the pressures that force certain decision points are external to them, even if their choices are deeply personal and will have ramifications for Talia and their families in the books to come.

I love the worldbuilding for Remora. It's partially based on a real Italian city but it has a lot of details which make it distinct from its real-world counterpart. The Manoush are clearly modeled after Romani or some similar group, just enough to be identifiable but with their own Talian beliefs. One of the Manoush is blind, and there's a bit of a "magic blind person" thing going on, but since a bunch of long-established characters can do things that are even more spectacular it feels like part of how Talia works sometimes. If the only magical characters had been the Manoush it would be more of a problem, but I think it works well and doesn't tokenize them much. This is the kind of place where crumbling a sculpture of a dragon into powder and putting it into a firework will make that firework explode into a dragon in the sky, flying horses are born about once a century, and mirrors can be tuned to look into another dimension. In that context, it's not nearly as weird for a blind character to be good at using his other senses and maybe have some subtle magic to back it up.

Falco’s storyline is more like a “magic cure” narrative in a way that Lucien’s was not. However, to call it that would be like saying that someone moving to a new country for medical care is a “magical cure”. I don’t think that’s fair, and I don’t think that’s how this ends up. Falco’s move to England requires giving up his family and never seeing them again in order to have a chance at being sound in body. This whole series can be described as a wish fulfillment fantasy for teens in rough situations, and this particular set of troubles is handled well overall. Georgia doesn’t fix her abusive stepbrother, but what she learns in Talia away from his malign influence helps her to respond appropriately to what’s been plaguing her at home.

This book seems to have a lot of “don’t worry, nothing gay to see here” moments. Georgia’s boyish appearance means she’s mistaken for a guy, and when actively in disguise she ends up (briefly) kissing only guys who know she’s a girl (and who she's maybe interested in). There’s one kiss with a girl (but that’s for ceremonial reasons), and in the epilogue part of how her new confidence is demonstrated is that she grows her hair long, dyes it, and now wears clothes that show off her body. When Russell is bullying her some of his taunts are homophobic, but Georgia doesn’t react as if they hit her viscerally. None of these details are necessarily good nor bad, but the cumulative effect is that moments which seem a bit queer are caveated in the narration to make sure they aren’t actually that way canonically. The final glow-up transforms Georgia from a girl hiding her body in boy’s clothes into a confident girl who cares about her appearance and chooses a different aesthetic. Her new clothes and longer hair don’t stop her from being queer, but they feel like the final step in a “not like other girls” transformation. The story would have been just as believable if she’d come out as a trans guy or nonbinary person at the end of it, based on her characterization alone, but also the plot doesn’t demand that resolution so it’s not a deal-breaker (just a bit frustrating). I'd also happily have taken this book mostly as-is where Georgia identifies as female, but without the "we promise it's not gay" narration accompanying the gender non-conforming moments and ambiguously queer kisses.

One major thing left hanging from CITY OF MASKS which gets addressed in CITY OF STARS is what Lucien's parents will do now that he's gone and lives in another world as Luciano. In this book they end up with someone else to take care of, and it seems like as good a setup as possible given what came before. There's a new storyline involving a newly-described Talian city and a very cool horse race, as well as Georgia's home life. Several major things are introduced and resolved, including a proposal, the aforementioned race, and Georgia's bully of a stepbrother. It leaves several things for later, such as the aftermath of Falco/Nicholas's decisions in both worlds, and some relationship developments. Georgia is a new narrator and her voice is distinct from Luciano's. CITY OF STARS might make sense if you start here and don't read the first book, especially because Georgia is new to Stravigation and needs a lot of things explained. Despite some repetition in content, those explanations largely come from different characters and are in a different city than the first book. They feel fresh and function as a refresher for anyone who read the first book, but don't try to explain that story all over again.

The number of times I had to say "but actually here's why it's probably fine" means I do like this book as part of the series, but it has too many uncomfortable details for me to highly recommend it. It handles issues of bullying and emotional abuse in a way that seems as healthy as possible for Georgia and could even been a guide for younger readers dealing with that same issue. I love the horse stuff, the characters are vibrant with competing but understandable motivations, and the details of the city are fascinating. But it edges on tokenizing the technically-not-Romani, keeps insisting that nothing gay happened, and has weird treatment of a maybe-magical blind character. 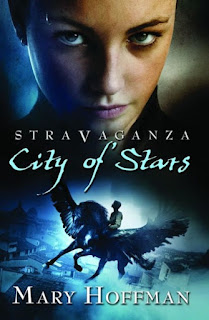