After breaking from life with the Pack, mercenary Kate Daniels and her mate--former Beast Lord Curran Lennart--are adjusting to a very different pace. While they're thrilled to escape all the infighting, Kate and Curran know that separating from the Pack completely is a process that will take time.

But when they learn that their friend Eduardo has gone missing, Kate and Curran shift their focus to investigate his disappearance. As they dig further into the merc's business, they discover that the Mercenary Guild has gone to hell and that Eduardo's recent assignments are connected in the most sinister way...

An ancient enemy has arisen, and Kate and Curran are the only ones who can stop it--before it takes their city apart piece by piece.

Kate and Curran have left the Pack, but their move has complications and a friend has gone missing.

Kate is trying to track down Eduardo while she and Curran settle into their new home outside the Keep. What seems like a series of very strange occurrences related to Eduardo's disappearance turn out to have an interesting and extremely dangerous cause in common. Curran has to financially disentangle from the Pack in a manner that doesn't leave them wrecked, and he ends up taking on fixing up the Mercenary Guild as a very necessary project. The worldbuilding is intertwined with the plot, since the main new things requiring explanation are all connected in some way. Partway through, Kate is grievously injured in a way that perhaps not even Doolittle can fix. Even if he can, it may be at the cost of parts of her that she won't even realize are gone until it's too late.

MAGIC SHIFTS follows up on several things left hanging from the previous book. Roland is lurking around, attempting to be a father figure for Kate. There's also more of a spotlight on George and Eduardo, whose first major roles were in MAGIC RISES. There's a new storyline involving the two of them, which is introduced and mostly resolved by the end of the book. As always, some things are left for later, they're a mix of relationship changes and what I'm pretty sure is Kate setting up a resource for the future. Kate is still the narrator and her voice is consistent with the previous book. As I noted for that one, she has continuity with her immediately previous self, but she has changed enormously from the beginning of the series. Due to an injury partway through, there's also a difference between her narration at the beginning and end of the book, and there may be more effects in the books to come.

Someone who tried to start with this book and hadn't read the previous ones could probably make sense of it and have a good time. This is about things changing as a result of the previous book, and that one would be a much better jumping-on point since it has a series recap at the start. However, if someone did start with MAGIC SHIFTS then they would be reading a procedural-adjacent mystery which is much closer in tone to the first books in the series than to MAGIC BREAKS. It acts as a kind of style reset under the new status quo, with Kate doggedly pursuing a case and trying to get the various agencies to cooperate (except this time she has Curran with her).

This is my favorite book in the series so far, partly but not completely because it deals with TBI in a way that resonates with me personally. Kate is placed in a position where she doesn't know what she doesn't know, and might not even realize that anything is wrong. It's a deeply scary situation, and it's a kind of danger she and Curran haven't dealt with before. 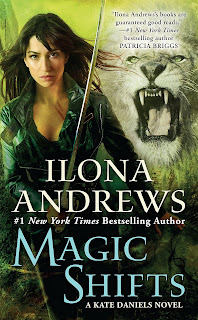