Sideways Pike is desperate. It turns out that Madeline Kline didn’t want to make out with her; infinitely worse, she was only flirting to get access to Sideways’ specter. Madeline has ripped the magical soul out of Sideways’ throat, and with it, everything that makes a witch feel whole. Madeline would know: the Chantry boys took hers, and she’s going to use Sideways’ specter to hunt them down and get it back.

Sideways Pike, lesbian witch extraordinaire, isn’t going to let little things like a treacherous crush or a brutal family of creepy witch hunters stop her, even if it means tracking down Madeline without the Scapegracers—her best friends, her coven, the girls she’s come to love ferociously above all else. But Sideways and her trusty bike are in for a bumpy ride . . .

In The Scratch Daughters, indie-bestselling author H. A. Clarke crafts a brilliant sequel to their tender, biting debut The Scapegracers: a raw and roiling tribute to queer lineage, to finding oneself, and to the deep love of chosen family.

THE SCRATCH DAUGHTERS explores friendship, found family, queer identity, and the corrosive nature of hate as Sideways and her coven try to track down Madeline and get Sideways' specter back.

The worldbuilding has three sides, mundane, magical, and creepy. The mundane bits include the specificity of place which grounds this in rural Ohio, Sideways’ dads and the antique shop, and the Scapegracers still going to school while all this is happening. A lot of the magical stuff is new-to-them hexes and some backstory on Mr. Scratch’s previous coven. The creepy is everything witchfinder and Chantry, including a fucking weird tour of their house.

THE SCRATCH DAUGHTERS wraps up several things left hanging from THE SCAPEGRACERS, the most prominent of which are Madeline’s next moves and what she wanted with Sideways’ specter. THE SCAPEGRACERS was about coming together to do witch stuff, but they did so very suddenly and this time around the cracks are showing in complex ways. There’s a new storyline embedded which deals with gender stuff, but mostly it’s an extension of the same wild ride which began in the first book. It leaves several things for later, mostly having to do with the climactic ending and assumed fallout to come. Sideways is still the narrator, and the general tone and densely syllabic style has carried over from THE SCAPEGRACERS, harshened by the absence of her specter in ways which overlap with but are distinct from dysphoria.

THE SCRATCH DAUGHTERS might make sense to someone who hadn’t read THE SCAPEGRACERS because much of the relevant backstory is quickly explained when its needed, but a lot of the worldbuilding related to witches was established in the first book and isn’t re-explained here. It’s fleshed out in some cool ways, but that might not be enough for someone completely new to the series. For that reason (and because this is the second of three books), I recommend starting with THE SCAPEGRACERS if you haven’t already.

The main goal and driving force in the narrative is the mission to get Sideways’ specter back from the person who stole it. To that end, driven by the jagged lack of a specter (made worse as that specter is used by its thief), Sideways makes impulsive move which stress out the other Scapegracers and highlight already-existing cracks between them. The various threads are handled well, mostly driven by Sideways’ inability to sit and wait when every moment is an agony they don’t know how to explain to their fellow witches. Sideways’ depression/dysphoria/whatever-you-call-it-when-your-soul-is-missing means that the mess of tensions with the other Scapegracers is so much that it’s numbing, paradoxically making it easier for me to handle as a reader since a lot of the emotional churning is happening between the other three, and Sideways gets bits and pieces of it sporadically.

Read THE SCRATCH DAUGHTERS to get some midwestern teenage lesbian witch fuckery and revenge in your life. 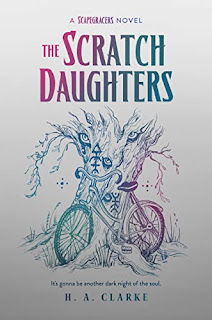