Rescued by the Married Monster Hunters by Rook Bird

Vessel is a creature living in a dimension-hopping dungeon. His destiny? Working for his colony until he outlives his usefulness. But secretly, Vessel engages in acts of rebellion: he mercy-kills human prisoners meant to feed the colony’s parasitic larvae. When a doomed human prisoner, Clarien, leaves Vessel a diary about his life as a monster hunter, it opens Vessel’s eyes to a possible new life. But when his kindness to humans is discovered, he’s sentenced to a brutal, slow death.

Rhys and Sera are monster hunters, graduates of a school that takes in disabled children cast out by their families and gives them powers and training. Although they have an open marriage, nothing lasting has come of it. When clearing out a dimension-hopping dungeon, they find a young hunter named Clarien who’s been left to die by monsters. Catching feelings while taking care of him isn’t something they planned on.

However, the man they know as Clarien is Vessel, who’s taken on the first Clarien’s identity using his diary as a guide. Pretending to be human is hard, though, and he’s started having strange feelings for Rhys and Sera that he has no idea how to interpret.

Feelings that scare him with their intensity. Feelings that might not matter if Rhys and Sera find out that he’s the sort of creature they hunt…

This book features a trans character in a setting where being trans is no big deal, badass disabled monster hunters, an enormous gruff swordsman who would do anything for his adorable bard, a back brace that doubles as armor, and a soft bisexual eldritch abomination learning what love really is.

RESCUED BY THE MARRIED MONSTER HUNTERS is a bloody story with a lot of insect-adjacent body horror as the married monster hunters and the disguised monster work together to stop the other monsters and fall in love along the way. It's funny and visceral with excellent worldbuilding and really great characters. It was the chitinous slow-burn fighter romance I didn't know I needed but I'm very grateful to have read. While at times the descriptions of the dungeon setting was skirting the boundaries of what is or is not an infodump, the characterization was really subtle, letting me realize what different comments meant for characters identities as much as halfway through the book. The premise for how one is chosen to become a monster hunter was really cool, it makes me want another story set at one of the Cairns. All three MCs have distinct voices and it was easy to tell them apart. I love the dynamic between the married couple, and the careful way they relate to the third MC. 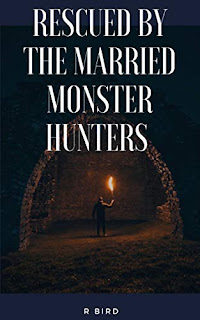