Kate has come a long way from her origins as a loner taking care of paranormal problems in post-Shift Atlanta. She's made friends and enemies. She's found love and started a family with Curran Lennart, the former Beast Lord. But her magic is too strong for the power players of the world to let her be.

Kate and her father, Roland, currently have an uneasy truce, but when he starts testing her defenses again, she knows that sooner or later a confrontation is inevitable. The Witch Oracle has begun seeing visions of blood, fire, and human bones. And when a mysterious box is delivered to Kate's doorstep, a threat of war from the ancient enemy who nearly destroyed her family, she knows her time is up.

Kate Daniels sees no other choice but to combine forces with the unlikeliest of allies. She knows betrayal is inevitable. She knows she may not survive the coming battle. But she has to try.

A mysterious enemy with a massacre-heavy army has appeared, now Kate and Curran must make a stand to save Atlanta.

As the final book in the series, this wraps up major things related to Roland, the People, Kate and Curran, Julie, Hugh, and Kate’s relationship to her magic. There’s a new storyline related to the appearance of a mysterious force which massacres whole towns in hours. This is, from one perspective, both introduced and resolved in this book. However, for anyone who read IRON AND MAGIC, this town-massacring force will be familiar but not yet stopped.

Kate is still the narrator, much changed from the earlier books, but she’s consistent with her narration in the previous one. It wouldn’t make much sense to start here. Not only is this the final entry in a ten-book series, but the first of the Iron Covenant books takes place right before this and involves a different group of the same attackers. Someone who just read IRON AND MAGIC and wanted to know what Hugh did next might find it useful to read MAGIC TRIUMPHS, but I’d recommend reading the most recent few Kate Daniels books at least in order to get more of Kate and Hugh’s relevant history.

The plot splits its time between Kate dealing with her son, trying to figure out who is massacring towns and how to stop them, and worrying about what Roland is up to. I’d anticipated more of a showdown between them, but as the story focused increasingly on the mysterious town massacres it slowly becomes apparent that Roland had his big battle in the last book and he lost, so whatever he does this time around will come from a different angle and not absorb as much of the plot.

With a series this long-running there can be issues with power creep, but I think the escalation overall was handled well. They weren't "coincidentally" powerful enough to meet this newest threat, but instead have to pull together all their resources (and a few they weren't planning to ever use), and even that isn't enough on its own. Most of the new worldbuilding this time around is devoted to the mysterious, town-massacring enemy, and to baby Conlan’s emerging powers. The various members of the Pack, the People, the Witches, etc., are only briefly described because whole books were devoted to establishing them earlier in the series, and now a name will suffice to invoke them. After having teased the Druids as a reclusive group, we finally get to see some of them, which was a nice and subtle payoff. Those who live on Kate and Curran’s street get more attention, but still, this isn’t an introductory book by any stretch. It does just enough to establish how everyone is at this point, and what the new status quo is after the big battle at the end. I’m happy with how it wraps up, especially with the epilogue. I plan to read more books in this world as they come out, but this seems to be the end for this part of Kate's life, at least. 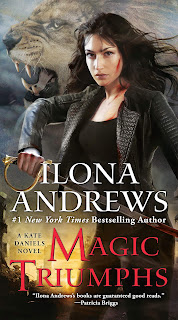