A princess isn’t supposed to fall for an evil sorceress. But in this darkly magical retelling of “Sleeping Beauty,” true love is more than a simple fairy tale.

Once upon a time, there was a wicked fairy who, in an act of vengeance, cursed a line of princesses to die. A curse that could only be broken by true love’s kiss.

You’ve heard this before, haven’t you? The handsome prince. The happily ever after.

Let me tell you, no one in Briar actually cares about what happens to its princesses. Not the way they care about their jewels and elaborate parties and charm-granting elixirs. I thought I didn’t care, either.

Until I met her.

Princess Aurora. The last heir to Briar’s throne. Kind. Gracious. The future queen her realm needs. One who isn’t bothered that I am Alyce, the Dark Grace, abhorred and feared for the mysterious dark magic that runs in my veins. Humiliated and shamed by the same nobles who pay me to bottle hexes and then brand me a monster. Aurora says I should be proud of my gifts. That she . . . cares for me. Even though a power like mine was responsible for her curse.

But with less than a year until that curse will kill her, any future I might see with Aurora is swiftly disintegrating—and she can’t stand to kiss yet another insipid prince. I want to help her. If my power began her curse, perhaps it’s what can lift it. Perhaps together we could forge a new world.

Nonsense again. Because we all know how this story ends, don’t we? Aurora is the beautiful princess. And I—

I am the villain.

MALICE is a well-crafted Sleeping Beauty retelling which features a protagonist struggling against monstrosity until it feels like her only path for survival. Alyce is fantastically self-centered in a way that is at once completely understandable and the makings of an excellent villain-protagonist. She's trapped in a brutal system which pretends to be a gilded cage for most but has always been pointedly cruel to her. The rivalry between her and Rose was well-developed, with a sense of history and several meaningful shifts when Rose drifts from being the main antagonist to merely an annoyance as Alyce's problems become so much bigger than what's happening in Lavender House.

The romance is fine, I guess, not my favorite but not terrible. It's not the core of the story and I don't think it's trying to be. As a retelling, this doesn't require any knowledge of the source material. While it's more than referential, it remixes and reframes the pieces until it's a new story which can stand on its own. I actually think it reads much better if you're not trying to see where it compares to the older story. I like how it dives into the Fae side of the story without moving the setting away from the kingdom, their lives are affected by the big deeds and magical pacts of hundreds of years prior but they just have to get through today, and the next day.

I was troubled by the way it uses references to the Pleasure Graces without actually clarifying what their role is. It felt like it was heavily implied that they're sex slaves (where slavery feels like too strong of a term for the other Graces even though they're just as trapped, but feels extremely appropriate if the Pleasure Graces have involuntary sex work as part of their Crown-mandated position). If all that's happening is their gift is used in potions that help other people have better sex then I wish the novel had taken the time to clarify that point. Instead, it uses a scene with someone pretending to be a Pleasure Grace, intimating that she's there to provide the kind of service to a new bride that has historically been associated with concubines and sex workers, and doesn't provide clarification. If the Pleasure Graces are sex slaves then that should have been the rallying cry, not the much weaker claims about wishing for the system to be "better" somehow. Basically there's just enough detail to be very uncomfortable and not enough for me to be sure that I'm incorrect about my guess. Ultimately it's a small part of the story and I'll keep an eye on how that aspect is handled (if at all) in the sequel.

Overall this is a solid retelling and a good novel which depicts the slow slide of a trapped young woman into the monster everyone already thought she was. 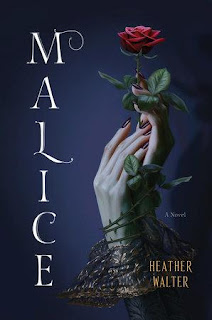