Iron and Magic by Ilona Andrews (The Iron Covenant #1)

Hugh d’Ambray, Preceptor of the Iron Dogs, Warlord of the Builder of Towers, served only one man. Now his immortal, nearly omnipotent master has cast him aside. Hugh is a shadow of the warrior he was, but when he learns that the Iron Dogs, soldiers who would follow him anywhere, are being hunted down and murdered, he must make a choice: to fade away or to be the leader he was born to be. Hugh knows he must carve a new place for himself and his people, but they have no money, no shelter, and no food, and the necromancers are coming. Fast.

Elara Harper is a creature who should not exist. Her enemies call her Abomination; her people call her White Lady. Tasked with their protection, she's trapped between the magical heavyweights about to collide and plunge the state of Kentucky into a war that humans have no power to stop. Desperate to shield her people and their simple way of life, she would accept help from the devil himself—and Hugh d’Ambray might qualify.

Hugh needs a base, Elara needs soldiers. Both are infamous for betraying their allies, so how can they create a believable alliance to meet the challenge of their enemies?

As the prophet says: “It is better to marry than to burn.”

Hugh and Elara may do both.

Hugh and Elara's contentious and generally toxic relationship is founded on resources and spite. At most they trust each other to be themselves, but there Elara has an advantage on Hugh because she knows his reputation and he's in the dark on her background. Their rapport slowly changes from genuine distaste to a rough but mutually desired intimacy.

This is not technically a sequel, but it does star one of the recurring antagonists from the Kate Daniels series, and takes place between books nine and ten of that series. That means it leans on a lot of worldbuilding from those books. As far as I can tell, the relevant worldbuilding and backstory are conveyed throughout IRON AND MAGIC, but I'm so immersed in that other series that it's difficult for me to say for sure. The main attraction of this book would be to know what Hugh is up to after certain events in the Kate Daniels books, so while someone could read this without having read those, they would be lacking a depth of knowledge which makes seeing this side of Hugh more meaningful.

The story begins when Hugh, cut off from the all-consuming and reassuring nature of Roland and his magic, has been exploring his restored mortality by trying to drink himself to death or until the void inside his soul disappears, whichever comes first. After his remaining Iron Dogs inform him that they're being hunted down, he pulls himself together and strikes a deal with Elena for them to marry and present a united front, he having troops with no base and her having a castle with few defenders. A lot of the plot focuses on their power plays as Elena and Hugh have different priorities and not necessarily the same goals while modifying their base. Gradually, as the threats they were abstractly fortifying against come calling, Hugh and Elena have to work together in more than name to protect as many as they can.

I enjoyed this immensely, especially as an exploration of someone who has until now been presented as a villain. This story explains who Hugh can become outside of Roland's dominion, and it turns out that person is a complex and interesting character who has all the competence and violence I've come to expect from him, but now has reasons to direct that violence towards protection rather than desolation. The way Elena and Hugh are just pretending to be a couple and the gap between the public narrative and the private reality is explored in some depth, and I like what Elena brings to the table. 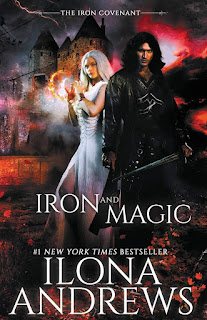