Four masters of urban fantasy and paranormal romance plunge readers into the dangerous, captivating world unearthed beyond the dark...

New York Times bestselling author Nalini Singh delivers a smoldering story with Secrets at Midnight, as the scent of Bastien Smith's elusive lover ignites a possessiveness in him that's as feral as it is ecstatic. And now that he's found his mate, he'll do anything to keep her.

From Milla Vane--a warrior princess must tame The Beast of Blackmoor to earn a place among her people. But she quickly discovers that the beast isn't a monster, but a barbarian warrior who intends to do some taming himself.

It's seer Makenna Frazier's first day on the job at Supernatural Protection and Investigations, and her first assignment is more than she bargained for when bodyguard duty for a leprechaun prince's bachelor party goes every which way but right in national bestselling author Lisa Shearin's Lucky Charms.

“Secrets at Midnight” is part of the ongoing Psy Changeling series. I haven’t read any of the other books, but this is an erotic and well-explained introduction to the series. I can tell that some character backstories were probably the focus of other books, but the amount of detail here was enough to let me sample whether it’s a series I’d be interested in reading further. Because it fits in after book twelve, it probably has spoilers for what happens to some characters, but I’d be surprised if any of them are major. As for the plot and characters, I like Kirby and Bastian, and their story is well-paced. Based on reading this I’m adding the main series to my TBR pile. Highly Recommend.

“Magic Steals” is about Jim and Dali, two of the shifters in the Kate Daniels series. It’s set before book seven of the main series and focuses on how their relationship becomes official while Jim helps Dali find out who is magically attacking a group of shop owners. The main plot is an engaging story and the progression of their relationship is handled well. Highly Recommend.

“Lucky Charms” is a prologue to the SPI Files series, covering Mac’s first day on the job. It had a fast-paced, quippy, pop-culture-referencing style which I prefer in much lower concentrations than what is presented here. That style is consistent, which has helped me decide that the rest of the series is not one I intend to read, but I do appreciate that this let me easily make up my mind. I’m also uncomfortable with how it handles queerness, seeming to know some of the complexity of gender presentation and sexual orientation, but still feeling like the main character is disturbed by a male-presenting character who shapeshifts into a woman. Not Recommended.

“The Beast of Blackmoor” is set in the series A Gathering of Dragons, taking place before the first book. It deals with consent and sexual joy in the context of previous abuse, where a warlord is devastating and abusing the people he rules. This is a higher concentration of traumatic events per page than my normal comfort level (alternated with erotica) so I don't think I'll try the rest of the series, but it's very well done. Recommend. 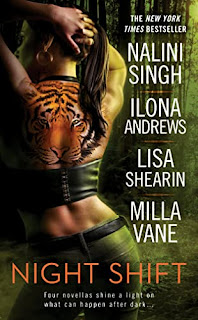