Scarred, solitary Derek Gaunt has separated from his Pack, and is truly a lone wolf. With no family he answers to no one; but is fiercely loyal to a chosen few. So, when several of those close to him are murdered, he’ll stop at nothing to hunt their killer through the magic-drenched streets of Atlanta.

Never one to be left on the sidelines, equally determined—some might say stubborn—Julie Lennart-Olsen soon joins in his pursuit; and what began as revenge turns into a race to save the city. Their search pits them against powers they never imagined and magic so old, it predates history. It may cost Derek his life, but there are things for which even he would risk everything.

MAGIC STARS is a novella starring Derek and Julie, set shortly before the events of MAGIC BINDS.

Derek is a pretty different narrator than Kate. He’s much more focused on what’s immediately happening. This is partly because, as a novella which fits in a specific place on the timeline without directly involving what Kate and Curran are doing, this is unlikely to appeal to anyone who hasn’t read the first seven Kare Daniels books. For anyone who has, however, it’s a welcome glimpse into a couple of prominent characters in a way that isn’t filtered through Kate.

The plot revolves around Derek tracking down the shapeshifters who murdered a family. He’s very quickly joined by Julie and they team up to find who put them up to it. I enjoyed the story and it’s a good complement to the main series. 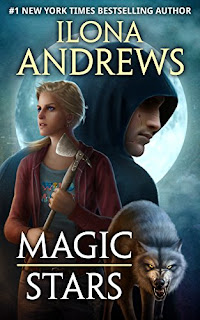