Welcome to the Books That Burn Fortnightly Roundup! Releasing every two weeks (one week early for Patrons). Remember to head to Transcripts That Burn for all available transcripts of the podcast. The newest transcript for our episode discussing THE HUNDRED THOUSAND KINGDOMS by N.K. Jemisin is now available.

Our shift to bi-monthly episodes is complete! You'll get two podcast episodes per month going forward. The plan is loosely that Patrons will receive episodes on the first and third Mondays, with the public release of those same episodes on the second and fourth Mondays. This will have some variation, especially when the first Monday is only a day or two into the month.

In my ever-shifting quest to find the perfect mix of review types, here's the current lineup for review types by days of the week: Sundays have review of series where I'm reading and reviewing the entire series (Sunday by Sunday) until it's done. Mondays don't have reviews because the podcast posts on Mondays, and Tuesday is empty because that's when most books are published. On Wednesday I'll post reviews of stand-alone books (this might also include self-contained books in shared universes where it's not necessary to read anything else in particular first). Thursdays are for ARCS and books sent directly to us from the author and/or publisher. Some of those are time-sensitive due to release dates and I don't want them to compete in the normal review queue. Fridays are for books where I'm not reading the entire series at once (or for ones where I meant to but at some point in the series ended up DNFing). Saturdays are for books I'm not finishing but I got at least 20% in before stopping.

We now have people asking us to mention their stuff in our stuff, which is an exciting development! I'm tucking it into this section so you can find it easily, this time it's a free thing that's coming up! You may recall my review of RESCUED BY THE MARRIED MONSTER HUNTERS by Rook Bird, posted back in 2021. As a Halloween promotion, the ebook will be free from October 29th to the 31st at this link.

MAGIC STARS by Ilona Andrews, book 1 of Grey Wolf is Urban Fantasy marketed as Adult. Derek and Julie try to find out what happened to a murdered family while Kate and Curran are away. Told in Third Person with Single POV.

CITY OF STARS by Mary Hoffman, book 2 of Stravaganza is Fantasy marketed as Young Adult. Georgia holds a horse statuette at night and wakes up in Talia, temporarily away from the incessant verbal abuse of her stepbrother. Told in Third Person with Ensemble POVs.

MAGIC BINDS by Ilona Andrews, book 9 of Kate Daniels is Urban Fantasy, with queer character(s), marketed as Adult. Kate is trying to avert a prophecy which says she'll watch either Curran or their future son die Told in First Person with Single POV.

IRON AND MAGIC by Ilona Andrews, book 1 of The Iron Covenant is Fantasy marketed as Adult. Hugh has an army and needs a base, Elara has a base and no army. They marry in an attempt to dissuade enemies with a united front, but they keep getting under each other's skin. Told in Third Person with Dual POVs.

CITY OF FLOWERS by Mary Hoffman, book 3 of Stravaganza is Fantasy/Historical marketed as Young Adult. Sky finds a perfume bottle which transports him to an alternate version of Italy. Told in Third Person with Ensemble POVs.

MAGIC TRIUMPHS by Ilona Andrews, book 10 of Kate Daniels is Urban Fantasy, with queer character(s), marketed as Adult. Kate must defend Atlanta once again when a mysterious horde massacres whole towns overnight, but this enemy is older than she imagined... Told in First Person with Single POV.

The Ilona Andrews/Kate Daniels marathon is finally over, wow. I have one more book in the Kate Daniels universe that I need to read, but that's set a decade later than these and I'm waiting a bit before I get to it.

I didn't have a formal DNF day, but I tried and discarded enough before the 20% mark that I could have. Briefly, here's that list:

I also wrote formal DNF reviews for THE OLEANDER SWORD by Tasha Suri and CITY OF SECRETS by Mary Hoffman.

Nothing of note here, for that turn to the re-reads section.

I'm re-reading Seanan McGuire's Toby Daye series, I started last week and am in the middle of the sixth book. This gives me an opportunity to update the queer rep summaries for the earlier books for characters that are around a while before it's known precisely how queer they are. I've got other reviews drafted for the next several weeks and wanted to keep reading but get a little break from writing reviews. I'm extremely bad at taking breaks so I'm also reading some new stuff (thank you, audiobooks).

For 2022 I'm hosting a reading challenge that lasts the whole year. October's prompt is to read something by an Asian author. Our patrons voted for GIRLS OF STORM AND SHADOW by Natasha Ngan. I re-read GIRLS OF PAPER AND FIRE in preparation to read the voted-for sequel.

THE CITY OF DUSK by Tara is going well, I'm reading it when I need a break from other things. I value a large book which is easy to dip in and out of, so that's working well.

As of right now I'm in the middle of CHIMES AT MIDNIGHT from Seanan McGuire's Toby Daye series, but I'm tearing through the series so that might well have changed by later tonight.

I started THE READER by Traci Chee as an audiobook. It's a narrator I've liked before and the story is going well.

I'm reading an ARC of OCEAN'S ECHO by Everina Maxwell, set in the same universe as WINTER'S ORBIT but not a formal sequel. I'm having an excellent time, this is basically a mind-control version of an arranged marriage with fake dating... in space.

I'm a little ways into SISTERS OF THE SNAKE by Sasha and Sarena Nanua. It's a princess and the pauper story and I'm not sure yet if I like it.

This time last year I read THREE DARK CROWNS by Kendare Blake. I've been meaning to continue reading the series (I've made it through the second book but not further).

As for the podcast, hopefully you're enjoying our most recent episode, FLEDGLING by Octavia Butler, as well as the first half of our interview with author Seanan McGuire (AKA Mira Grant, A. Deborah Baker), released in January. If you'd like to receive the second (spoiler-filled) half of the interview, please consider supporting us on Patreon. Patrons receive this newsletter one week early, as well as a list of upcoming podcast episodes for the next three months. 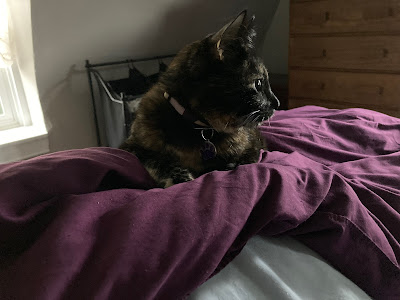