Mercenary Kate Daniels knows all too well that magic in post-Shift Atlanta is a dangerous business. But nothing she’s faced could have prepared her for this…

Kate and the former Beast Lord Curran Lennart are finally making their relationship official. But there are some steep obstacles standing in the way of their walk to the altar…

Kate’s father, Roland, has kidnapped the demigod Saiman and is slowly bleeding him dry in his never-ending bid for power. A Witch Oracle has predicted that if Kate marries the man she loves, Atlanta will burn and she will lose him forever. And the only person Kate can ask for help is long dead.

The odds are impossible. The future is grim. But Kate Daniels has never been one to play by the rules…

MAGIC BINDS revolves around Kate's attempts to avert two terrible prophesied outcomes based on her marriage (or not) to Curran. Based on the guidance of the Witch Oracle, she tries to do the right thing in a series of seemingly unconnected moments which shape her trajectory on the way to the wedding and/or war with her father. She's trying hard not to be a monster. Sometimes she's trying to remember why that matters at all.

There's a little bit of new worldbuilding, mostly related to the history of Kate's family, but this is a book which pulls together things from the rest of the series so far. It's not trying to build more of the world, it's trying to show how Kate and her allies are determined to defend Atlanta.

I love the details about Kate being interrupted with details of wedding planning in the middle of everything. It shows an enormous amount of trust that everyone even can think about this huge party that will mostly likely happen after the battle where they could all die. They believe that they'll survive, even if that's not outright stated as Roman makes Kate answer about yet another wedding detail she hasn't even begun to ponder.

Kate comes so close to crossing a line she promised Curran she wouldn't cross, and it happens early enough that she has time to sit with that moment and process it. She doesn't want to be her father, she doesn't want to be Sharrim. But it'll be hard to save the city without understand him and her role better before the battles to come.

MAGIC BINDS addresses several things which had been somehow unresolved by previous books, such as Julie’s conversations with Roland, Andrea’s pregnancy, Ghastek, Christopher’s mental health issues, etc. The new storyline for this book involves a prophecy which threatens dire consequences whether or not Kate marries Curran, and her actions have the chance to shape which terrible thing happens. She hopes to avert them both. It both introduces and resolves Saiman’s kidnapping, using that as part of the main plot. The technically-not-a-cliffhanger ending leaves one very specific thing to be resolved by the final book, and the final few events leave some others which will need some more concrete resolution later.

Kate is still the narrator, but the growing influence of her inherited powers means she's starting to sound like someone else sometimes. The differences in narration are sometimes made obvious though things like typesetting, but even without that there's a distinct way that Kate-as-Sharrim speaks when she's in danger of losing herself. It wouldn't make sense for someone to start here. The last good entry point to the series was book seven, where there's a detailed synopsis of the series so far. MAGIC BINDS is the penultimate book in the series, the one where big favors are called in, allies are brought to their side, and old rivals are bound to new service. It feels big, climactic, and very cool for someone who has read the main series so far, even more so for anyone who managed to read the various short stories and associated novels which accompany it. For anyone who tries to read this book without that background, there are too many characters and too few explanations of their importance, combined with not enough explanation of even more characters. This is perfectly fine for the penultimate book in a long series, but it does mean it's a poor starting point for someone determined to ill-use it so.

I love this one, it wraps up enough things to let the actual finale maybe have a cleaner ending, but doesn't feel like it's putting things away early. I'm excited for the final book! 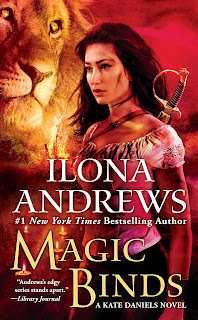