As the mate of the Beast Lord, Curran, former mercenary Kate Daniels has more responsibilities than it seems possible to juggle. Not only is she still struggling to keep her investigative business afloat, but she must now deal with the affairs of the Pack, including preparing her people for attack from Roland, a cruel, ancient being with godlike powers.

As Roland's long shadow looms ever nearer, Kate is called to attend a gathering of leaders from Atlanta's supernatural factions. When one of the Masters of the Dead is found murdered by a shapeshifter, Kate is given less than twenty-four hours to hunt down the killer. And this time, if she fails, she'll find herself embroiled in a war that could destroy everything she holds dear...

I enjoyed this on its own and as a climactic entry in a long-running series. It marks the first appearance of Roland, at long last, and I'm excited to see how the rest of the series plays out. Kate has changed enormously since the beginning of the series, so much so that she feels like a different narrator from the early books. She's redirected her feelings towards caring for and about the people she loves, rather than being consumed by the need to hide from her father long enough to get strong and kill him.

Kate stops being able to keep a lot of things secret, losing a lot of the reasons which were encouraging her silence. Kate and Curran are a much more unified front in this book, it feels like the conversations they had in MAGIC RISES were very good for them as a couple. A little of that is made easier by Curran being in another location for most of the book, but it was a bittersweet absence. Robert and Thomas, the Rat alphas, get more of a spotlight than they've had all series. This includes a discussion of how they keep being out of the loop which is so meta that it feels like it's doing double duty as an explanation to the readers as well as the alphas.

The worldbuilding includes more specific information about Roland, including a truly terrifying prison which he had constructed a while ago. Ghastek gets a bit of spotlight when he and Kate are forced to spend time together, he's an interesting character and I enjoyed finding out some of his backstory.

MAGIC BREAKS wraps up a few major things that were left hanging, such as whether Roland's Warlord survived their last fight. Most of the big changes have been telegraphed for a while, but are finally coming to a head. The biggest thing it addresses which I didn't expect to get resolved is the status of Ted, the extremely bigoted head of the local Order chapter (and Kate's former sort-of boss). The scenes around that are some of the tensest and most climactic in the whole book, coming midway through and setting a high bar for the second half to meet. It meets and exceeds it, though the ending is more driven by power displays than sheer gore. There is technically a new storyline because Kate is made to solve a murder that was orchestrated specifically to place her and the Pack in a situation with no escape. This isn't the last book in the series, even though it feels very climactic. It changes the status quo in some very profound ways, uprooting things that have been settled since the first book. It could make sense to start here because there is a very thorough synopsis of the series so far as a kind of prologue told by one of the secondary characters. This changes enough things that if someone wanted to read that synopsis and take the current relationships as given, the book could make sense and be very enjoyable.

This main action launches when a meeting between the Pack and the People is interrupted by an accusation that a shapeshifter murdered a Master of the Dead. As the accusation is backed up by a dead body, Kate and a small team try and scope out the crime scene, knowing it's definitely a trap. By the end, things cannot stay as they were, and both Kate and Curran have to make some difficult decisions. 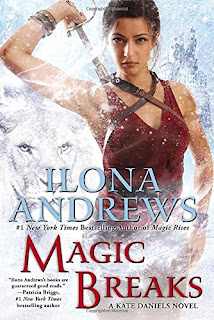