"I spent my life dreaming of being invited to Xavier's School for Gifted Youngsters. Turns out irl it has the vibe of a Dark Kermit gif. I just want to stay in the closet kissing my hot girlfriend.”

Despite the chaos and me being a dumpster fire, things turned out okay last time. We beat the villain, and I'm part of a superteam. I have cool friends, and somehow (don't jinx it, Dylan), I even got the girl. Not just any girl—the icy badass who’s secretly soft-hearted. Things should be great, right? Now the government’s come knocking, and we’re summoned to superhero school. Which is a dream come true, except it's run by a corporation. But not all corporations are shady, right? It's fine, if you can get over the teeny, tiny problem that there’s also an evolution-obsessed organisation trying to figure us out. Plus, it turns out we aren’t as rare as we thought. There’s another group of mutants with dangerous powers running loose, and we’re the ones who’ll have to stop them. I hope the part on my school records that says “near-pathological disregard for authority” isn’t going to come back and bite me. Maybe it’ll be the thing that saves us.

YOUNG, GIFTED & QUEER puts the Cute Mutants through a lot of blood and violence in order to get to someplace that's hopefully better than where they started. The MC is wonderfully snarky without being mean, the bonds between the characters (mutant and non-mutant alike) are complex and changing throughout the story, and the shadowy government organization trying to control their every move is pretty dang shadowy. Everyone's abilities are growing without making them feel overpowered (at least not yet), and they have much to figure out as friends, warriors, and fellow mutants. Also I like the MC's new weapon, both as a character and as a nice way to illustrate her growing abilities (not all of which are under her control).

I'm using "she" for the MC because those are her pronouns in this volume, but she's starting to maybe think about some gender stuff and I'm here for it, however many volumes that takes.

This book two of a series so it's time for the sequel check. It wraps up several big things left hanging from the previous book, and it has a pretty major storyline that starts here and wasn't present in the other book. It has several things which were introduced and resolved in this book, and it's not the last book in the series so I'm happy to report that it's explicitly left a lot of things which could get resolved in later books (but without feeling like a massive cliffhanger). The MC is the same. There was a very positive change in her narration since in the first book she used a lot of casually ableist language and most of that is gone here. It's at a level where I'd barely notice it if I hadn't been on the lookout after the first book. But, generally, she sound like the same person from book to book, so there's definite continuity of narrative style. Finally, there's enough context and explanations here that I think someone could pick this up and understand almost all of it. But really, this is book two, rather than starting here it makes sense to go back for book one. This series is poised to work well with an episodic style and the groundwork is excellently laid, even this early on.

I think my favorite thing in this series is the way it can make even cliché parts of a queer teenage mutant's journey feel fresh and important. The MC is very genre-savvy, and aware of which genre she's in, which is crucial, but she doesn't anticipate everything and there are some pretty heart-wrenching things that she didn't predict and wasn't ready for. It's a delicate balance to write a genre-savvy character without having them feel either omniscient and boring or like a Cassandra (always right but never believed), and I think this book nails it. It's not hard to guess that "shadowy government organization is shadowy, does not great stuff with their knowledge of mutants" was a likely setup after the first book, but where this volume takes that premise was both exhilarating and heartbreaking. It's a strong sequel that I like even better than the first book, I'm very happy about this one. 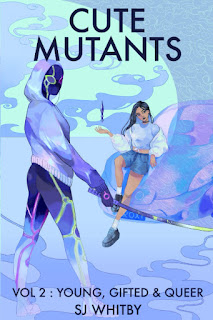