In the wake of her father's death, Ash is left at the mercy of her cruel stepmother. Consumed with grief, her only joy comes by the light of the dying hearth fire, rereading the fairy tales her mother once told her. In her dreams, someday the fairies will steal her away, as they are said to do. When she meets the dark and dangerous fairy Sidhean, she believes that her wish may be granted.

The day that Ash meets Kaisa, the King's Huntress, her heart begins to change. Instead of chasing fairies, Ash learns to hunt with Kaisa. Though their friendship is as delicate as a new bloom, it reawakens Ash's capacity for love-and her desire to live. But Sidhean has already claimed Ash for his own, and she must make a choice between fairy tale dreams and true love.

Entrancing, empowering, and romantic, Ash is about the connection between life and love, and solitude and death, where transformation can come from even the deepest grief.

This a quiet and powerful Cinderella retelling with a focus on the MC's interior world rather than the exact details of the vaguely antiquated setting. It's a fairy tale steeped in fairy tales, discussing strange bargains of dubious origin as the MC first is connected to her departed mother then seeks escape from her abusive stepmother via fairy tales. It portrays the MC's two romantic options of a sort in a way that makes them obviously two different paths, two different ways the rest of her life could go, not just two people she cares for. Even the possible pairing which looks straight at a glance feels queer in the way that two bi people dating is unquestionably queer even if it looks straight to an outsider. The sapphic pairing made me want to scream for them to kiss already, I'm not kidding about this being a slow burn all around.

On its merits as a retelling, I enjoyed how a lot of what is usually the main story is kind of happening in the background (e.g. the prince's search). It stands on its own and doesn't require any familiarity with the original or some of the more famous adaptations. If you are familiar with the basic tale there are references to anchor it without feeling like its wholly retreading ground.

Overall it's a lovely mix of vibes, yearning, queerness, and fairy tales with undertones of grief, loss, mourning, and moving on. 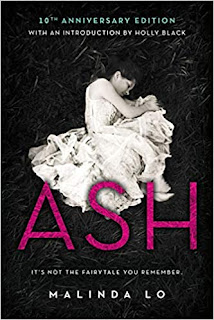