John Persons is a private investigator with a distasteful job from an unlikely client. He's been hired by a ten-year-old to kill the kid's stepdad, McKinsey. The man in question is abusive, abrasive, and abominable.

He's also a monster, which makes Persons the perfect thing to hunt him. Over the course of his ancient, arcane existence, he's hunted gods and demons, and broken them in his teeth.

As Persons investigates the horrible McKinsey, he realizes that he carries something far darker. He's infected with an alien presence, and he's spreading that monstrosity far and wide. Luckily Persons is no stranger to the occult, being an ancient and magical intelligence himself. The question is whether the private dick can take down the abusive stepdad without releasing the holds on his own horrifying potential.

HAMMERS ON BONE is a story about justice and protection for a kid who asked the detective for help, and the strange path to get there. I love the syllabic density in this story. The MC speaks like a noir detective, all “skirts” and “dames”, cigarette smoke and “look, sister”, but without talking down about it. This is a style which is filled with a bunch of words that I'm pretty sure aren't actually slurs but are at the edge of what one can say while being polite, and would get very strange looks either way. The book is canonically set in the 21st century, making a strange but very cool mix of cultural touchstones. The full effect is one of stepping knowingly into an uncomfortable linguistic space, just as many of the characters are viscerally uncomfortable in their skin due to spores, tentacles, or growing eyes. Everything builds that uncanny feeling to center the reader in the MC's head without taking them out of the modern world. Well worth reading, I enjoyed this one! 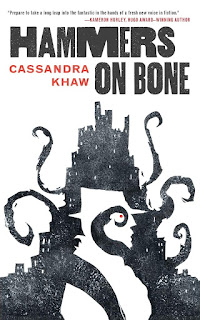