They Both Die at the End by Adam Silvera

Adam Silvera reminds us that there’s no life without death and no love without loss in this devastating yet uplifting story about two people whose lives change over the course of one unforgettable day.

On September 5, a little after midnight, Death-Cast calls Mateo Torrez and Rufus Emeterio to give them some bad news: They’re going to die today.

Mateo and Rufus are total strangers, but, for different reasons, they’re both looking to make a new friend on their End Day. The good news: There’s an app for that. It’s called the Last Friend, and through it, Rufus and Mateo are about to meet up for one last great adventure—to live a lifetime in a single day.

In the tradition of Before I Fall and If I Stay, They Both Die at the End is a tour de force from acclaimed author Adam Silvera, whose debut, More Happy Than Not, the New York Times called “profound.”

I read this book expecting a story where two people die at the end. What I got was a tender, heartfelt, and sometimes exhilarating story about two guys connecting when they're almost out of time, sharing their friends and their last moments.

I really like the narrative structure. The first part of the book stayed with the two MCs for a while, letting me really get to know them as characters and get a sense of the setting. Then, once they were established as MCs, it slowly introduces snippets from other characters' perspectives to give context, sometimes to get in the head of someone the MC's interacted with (or someone who knows someone they interacted with). It helped to ground their experiences and create this feeling of many people living their lives with all these connections, but always returning to the MCs and their growing bonds with each other. There were only a few places in this snippet of the world which were important, but even with these few locations and small selection of characters it made it feel big. They had time to visit places and return to a few key ones as things changed throughout the day, or sometimes only the reader was the one revisiting when the second glance was through another character's eyes. Many of the characters grew or changed in this one day. Not everyone, obviously, a mass epiphany or everyone becoming great overnight would have broken immersion, but enough for it to feel like a book where most people became a little bit better for having gone though this day, for having known each other. The way the central conceit was incorporated into the rest of the modern world was really smooth. When they first meet on the app I was laughing because it felt right, that's absolutely how this kind of app would have played out in 2017 when the book is set. Grounding this in a specific day on the calendar was very wise, since it means that even as the popular apps change it can still feel relevant because it's not pretending that technology is ageless or something. It also feels like it'll be resonant for a long time because it's specific and poignant without being self-aggrandizing.

I didn't expect the ending to blow me away, but it did. I mean, it's in the title, right? But this is a book that's fully about the journey, not the destination, and it has room to be fun, serious, contemplative, heart-pounding, sad, and wonderful, all in one day of the characters' lives. The seeds of the end were there from the beginning and I'm so sad that the book is over, even though I knew it had to end eventually. I love the ending. I'm very sad about it, but it's perfect for this book and these characters. If it really had to be over sometime this was probably the best way it could have gone about it. 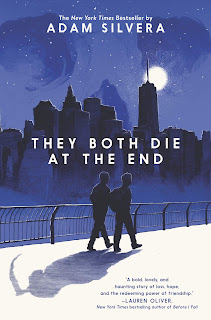