A new King Arthur has risen and she's got a universe to save.

Coming to terms with your identity is always difficult. But for Ari, as the reincarnation of King Arthur, it just got a lot more complicated. What on Earth (or anywhere in space) can she hope to achieve with a rusty spaceship and an adolescent wizard called Merlin?

Gender-bending royalty, caustic wit and a galaxy-wide fight for peace and equality all collide in this brilliant reinvention of the Arthurian legend.

The pace at the start of the book is so fast it was almost dizzying, like running while crying and laughing. I got a good sense of who the MC is and her dynamic with her brother, and I liked how the worldbuilding stopped just shy of infodumping by making a bunch of things happen so they could narrate to the reader as they ran. It’s genre-savvy and pretty self-aware, knowing how ridiculous everything looks doesn’t lessen the stakes when they’re often life-or-death. It’s a fun kind of darkness, the kind that “futuristic Arthurian retelling in spaaaaaace” invokes, one with queens, cosplay, corporations, kinship, spaceships, magic, and quests. It introduces more serious and tragic elements lightly at first, later returning to them to dwell in their plot significance, then doubles down in the second half of the book as things go from “frustrating but maybe solvable” to “a lot of people have died and more people will die if we don't fix this”.

The way Merlin kept thinking or talking about where characters fit in the cycle was helpful, especially early on, since I have a little familiarity with the Arthurian canon but not enough to know where all the players fit in a retelling unless the narrative gives me some help. It also grounded his perspective on them, establishing him as much as it introduced them.

The main frustrating thing for me was that a character comes out as ace in a "we could have avoided all this tragedy if you'd ever asked anything about me" way, and it made it feel like their identity was a plot point to help misdirect other drama. The other queer rep in the book felt really good and the whole thing adds up to an almost entirely queer cast with just the canon rep, so having that character's identity only come up one time to explain someone else's issue was disappointing.

This is part one of a longer saga, and it does a good job of setting up who these versions of the characters are. The ending is a "to be continued" situation, but enough of this volume's plot wrapped up for me to be satisfied. I'll definitely be checking out the sequel, this is a cool and weird world and I want to know where it goes next. 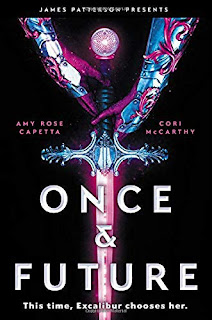