The Wicker King is a psychological young adult thriller that follows two friends struggling as one spirals into madness.

Jack once saved August's life...now can August save him?

August is a misfit with a pyro streak and Jack is a golden boy on the varsity rugby team--but their intense friendship goes way back. Jack begins to see increasingly vivid hallucinations that take the form of an elaborate fantasy kingdom creeping into the edges of the real world. With their parents' unreliable behavior, August decides to help Jack the way he always has--on his own. He accepts the visions as reality, even when Jack leads them on a quest to fulfill a dark prophecy.

August and Jack alienate everyone around them as they struggle with their sanity, free falling into the surreal fantasy world that feels made for them. In the end, each one must choose his own truth.

Written in vivid micro-fiction with a stream-of-consciousness feel and multimedia elements, K. Ancrum's The Wicker King touches on themes of mental health and explores a codependent relationship fraught with tension, madness and love.

THE WICKER KING is a tale of compulsion, mental illness, loyalty, love, and consent; finding how far a king and his knight can go to save the world without burning up.

I loved reading this. The two main characters are so intertwined, so vivid and resonant that it took me half the book to realize that only one of them was actually a POV character. The way the story is told in one to two page sections made it feel like I could take a break anywhere if I needed to, if it ever got too intense for me. Instead I barely paused, inhaling it in a single sitting.

The story is very focused on the MCs and their intense relationship, but has a few secondary characters and devotes enough time for them to feel like full characters. In a book so focused on the interior worlds of just two people it would be easy to have other characters be ill-defined and mere window-dressing. Instead their reactions to the MCs both established the secondary characters in their own right and helped to build up the MCs by commenting on things they were unable or unready to consider. Some of the secondary characters are also love interests, and they're handled in a way that maintains their agency even as they are allowed less and less space in the MCs' world. The photos, documents, and slowly darkening pages helped with world-building and mood, but even without that assistance this story is absorbing and fascinating. There were two worlds to build, and both were excellently laid.

This is primarily about someone having difficult telling apart fantasy and reality, and the best friend doing his best to help. There are voices of reason trying to provide stability at various points, but the extent to which they do or do not succeed is crucial to the story, so take care of yourselves and check the CWs before proceeding. 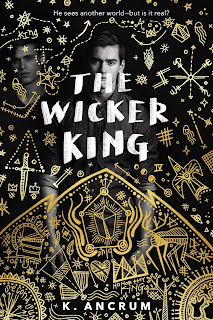