Thirteen of YA's most celebrated names reimagine Edgar Allan Poe's most surprising, unsettling, and popular tales for a new generation.

Edgar Allan Poe may be a hundred and fifty years beyond this world, but the themes of his beloved works have much in common with modern young adult fiction. Whether the stories are familiar to readers or discovered for the first time, readers will revel in both Edgar Allan Poe's classic tales, and in the 13 unique and unforgettable ways that they've been brought to life.

This anthology is a collection of retellings of stories by Edgar Allan Poe, where the second half of the book holds the original tales. Most of the originals I’d never read before because I don't really care about Poe, so I came in fresh for almost all of these. In each case I read the retelling and the original to compare them, but you could easily just read the retellings. I tended to better like the ones which were less of a re-skin and a setting update, but were the ones that fundamentally changed some aspect of the narrative, either by gender-swapping, exploring aspects like misogyny and various marginalizations, or changing the ending. That's mainly a reflection on me not specifically caring about Poe and should not be taken as a statement on the quality of the individual retellings, since they weren't all going for the same things (which is good, especially in an anthology).

I'm going to highlight a few of my favorites. The one pretty straightforward retelling which pulled me in even when I wasn't expecting it to was "It's Carnival!" I like the updated setting, and I especially like how the MC’s motives are understandable just based on how the other person acts during the very short timeframe of the story. It also captures that feeling of overkill from the original, that this event is simultaneously horrific and relatable. "She Rode a Horse of Fire" is the only one I read before reading the original, and I like it a lot! The original felt boring and confusing (at least partly because of how I know I missed a bunch of the social context and implications of what happened), but the retelling is really vibrant and engaging, it captures the intriguing parts of the original while feeling like a new story, which is great. I particularly like how the narrator is a character instead of being a passive observer. Lygia is chilling and perfect, it makes all the words fall out of my head and I love it so. I would read a whole series set in the world of "A Drop of Stolen Ink", I love heists and retellings, and a retelling that turns a kind of boring description of an cool exploit into a sci-fi future story about identity, loss, and yearning is just awesome.

Honorable mentions go to "Night-Tide" for sapphic yearning, "The Glittering Death" for its handling of the MC, "Happy Days, Sweetheart" for its calm and calculating heroine, "The Oval Filter" for coolest technological update, "Red" for sheer baddassery, and "The Fall of the Bank of Usher" for making hacking feel like magic and fungus feel like technology.

BTB 2021 Reading Challenge (QAOC) - Anthology with at least one QAOC 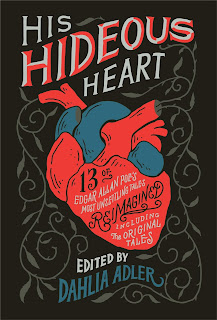