The City & The City by China Miéville

When a murdered woman is found in the city of Beszel, somewhere at the edge of Europe, it looks to be a routine case for Inspector Tyador Borl of the Extreme Crime Squad. To investigate, Borl must travel from the decaying Beszel to its equal, rival, and intimate neighbor, the vibrant city of Ul Qoma. But this is a border crossing like no other, a journey as psychic as it is physical, a seeing of the unseen. With Ul Qoman detective Qussim Dhatt, Borl is enmeshed in a sordid underworld of nationalists intent on destroying their neighboring city, and unificationists who dream of dissolving the two into one. As the detectives uncover the dead woman's secrets, they begin to suspect a truth that could cost them more than their lives. What stands against them are murderous powers in Beszel and in Ul Qoma: and, most terrifying of all, that which lies between these two cities.

THE CITY & THE CITY is a detective story in a strange but non-magical setting which manages to feel as off-kilter and wondrous as some fantasy worlds, but without the level of vivid detail that would usually imply.

I love the immersive world-building in THE CITY & THE CITY. This was my second time reading it, and I caught the little hints that I didn't know how to place or didn't understand the importance of the first time I read it. The interplay between the city and the city is too interesting of a thing to spoil here, suffice it to say that there is a definite sense of place in the book. I appreciated the finicky bureaucracy and red tape bound up in this premise. It has a singular focus on the MC and his understanding of events as he tries to solve a woman's murder in his city. My one quibble is that it feels like the book shifts away from trying to solve her murder and becomes focused on the circumstances in a way that felt like it decreased the importance of her death. It was easy to forget by the end that this was a murder mystery and not just a story of political intricacies and border crossings. Part of that is because her death isn't the central mystery, really, she's a catalyst for the real story of this guy and his place in the cities. The MC cares about her death the whole time, to be clear, he just has to deal with a lot of other stuff. Between that and the choices over who dies and lives in the confrontation at the end, it did leave a bit of a sour taste for me in how the secondary characters were treated. 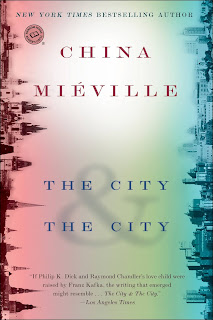