Aristotle is an angry teen with a brother in prison. Dante is a know-it-all who has an unusual way of looking at the world. When the two meet at the swimming pool, they seem to have nothing in common. But as the loners start spending time together, they discover that they share a special friendship—the kind that changes lives and lasts a lifetime. And it is through this friendship that Ari and Dante will learn the most important truths about themselves and the kind of people they want to be.

*Update: I no longer recommend this book because the way that the trans character is discussed and misgendered appears to be part of a pattern of transphobia on the part of the author and not just an area where the characters could learn better in later books. For this reason I no longer recommend the book and I will not be reading the sequel. My original review is intact below.

ARISTOTLE AND DANTE DISCOVER THE SECRETS OF THE UNIVERSE is a slow burn novel about friendship, loyalty, and growing up, following two teenage boys who are figuring out who they are and who they want to be.

I truly loved reading this. Normally I have trouble getting into realistic fiction, but I was totally absorbed and spent all day curled up with this book. The MC’s struggle to figure out his feelings was given the space to breathe and develop, nothing felt rushed. The narrative covers more than two years (approximately ages 14 to 17) and he grows up a lot during that time. The secondary characters change too, in ways that make evident the changes they’re going through behind the scenes. It means that when things about how people around him did or did not communicate gradually change, they change because the topic came up and then time passed and a bunch of stuff happened and then they were in a different place emotionally and able to do something different when it came up again. That's like, a normal thing in real life, I know, but the way it's written here felt good. The ways his parents answer his questions (or don't) when he's younger versus when they see him as more mature felt like it fit them as characters as well as being information he could handle by the time he received it. There's so much great stuff with the MC's parents and his friend's parent that make it clear that they have lives beyond him, and the way the MC thinks about his parents as people changes as he gets older.

The dynamic between Ari (the MC) and Dante (his friend) was very relatable to me as someone who struggled as a teen and young adult with whether I knew anyone enough to say we were friends. They obviously are, but Ari spends a lot of the book not sure if they're really friends, then not quite able to make the leap to say "best friends", even after a pretty major incident where his actions spoke more than his words were able to. There are so many parts of their relationship where Dante is very sure and Ari lets the perfect be the enemy of the good and can't quite do or say something that feels so obvious to everyone else.

Content note: A background character who is never around in the actual story is in jail for the murder of a trans person. To me this was a disturbing but sadly realistic reason for someone to be absent due to incarceration, but please be aware that that's there. If I read any sequels I'll be on the lookout for how any possible redemption arc is handled for that character, as it has the potential to be additionally transphobic. 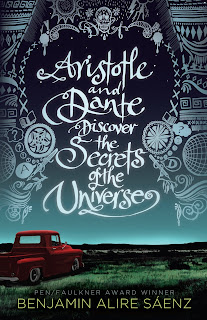