The House of Shattered Wings by Aliette de Bodard (Dominion of the Fallen, #1)

Multi-award-winning author Aliette de Bodard brings her story of the War in Heaven to Paris, igniting the City of Light in a fantasy of divine power and deep conspiracy.

In the late twentieth century, the streets of Paris are lined with haunted ruins. The Great Magicians' War left a trail of devastation in its wake. The grands magasins have been reduced to piles of debris, Notre-Dame is a burnt-out shell, and the Seine has turned black with ashes and rubble and the remnants of the spells that tore the city apart. But those that survived still retain their irrepressible appetite for novelty and distraction, and the great houses still vie for dominion over France's once-grand capital.

Once the most powerful and formidable, House Silverspires now lies in disarray. Its magic is ailing; its founder, Morningstar, has been missing for decades; and now something from the shadows stalks its people inside their very own walls.

Within the house, three very different people must come together: a naive but powerful fallen angel, an alchemist with a self-destructive addiction, and a resentful young man wielding spells of unknown origin. They may be Silverspires' salvation-or the architects of its last, irreversible fall. And if Silverspires falls, so may the city itself.

THE HOUSE OF SHATTERED WINGS is a slow burn murder mystery steeped in a slightly fantastical but still brutal vision of colonialist France, recasting human interests as Fallen ones with the specter of lost heaven at their backs. For a story so detailed and complex, there's actually a low number of major players carrying out the machinations. This allows for political maneuvering that's fairly easy to follow (for a multiple-POV multiple-murder mystery, at least). The end result is an absorbing world and a very satisfying resolution, setting the stage for greater things still to come in the rest of the series. It's full of legacy, caught between trying to forget painful histories and claiming present power on the basis of past struggles. I like the characters even when I hope they'll lose in the layers of deception, the weight of history, and the game of Houses.

The world-building is really good, it explicitly rejects assumptions that the colonizer's magic (to the extent that the Fallen are French if they're from any nation at all) is the only kind. Most of the characters disagree with each other about something, and the combination of those disagreements builds a fuller picture of the world even as it informs who they are as individuals. The perspective shifted between the MCs frequently enough to keep the story moving but not so often as to be confusing.

I loved reading this, it tied off this book's plot rather neatly while transforming the stage for further power struggles. It's definitely not a cliffhanger, and yet I need to know what everyone does next. I will definitely check out the sequels. 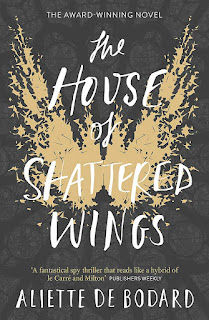