This is How You Die, edited by Ryan North, Matthew Bennardo, and David Malki! (Machine of Death, #2)

If a machine could predict how you would die, would you want to know? This is the tantalizing premise of This Is How You Die, the brilliant follow-up anthology to the self-published bestseller, Machine of Death.

The machines started popping up around the world. The offer was tempting: with a simple blood test, anyone could know how they would die. But the machines didn't give dates or specific circumstances-just a single word or phrase. DROWNED, CANCER, OLD AGE, CHOKED ON A HANDFUL OF POPCORN. And though the predictions were always accurate, they were also often frustratingly vague. OLD AGE, it turned out, could mean either dying of natural causes, or being shot by an elderly, bedridden man in a botched home invasion. The machines held onto that old-world sense of irony in death: you can know how it's going to happen, but you'll still be surprised when it does.

This addictive anthology--sinister, witty, existential, and fascinating--collects the best of the thousands of story submissions the editors received in the wake of the success of the first volume, and exceeds the first in every way.

This collection of stories share a central premise (there is a machine which, when provided with a blood sample, prints the user's cause of death on a small strip of paper) but take it in many different directions. Several of them depict ways that such a device might be used by governments, some involve aliens, and a few are very surreal. My favorites are “Old Age, Surrounded by Loved Ones”, “Zephyr”, “Lazarus Reactor Fission Sequence”, “Drowning Burning Falling Flying”, “Monsters from the Deep”, “Toxoplasmosis of the Brain”, “Cancer”, “Two One Six”, “Meat Eater”, “In Sleep”, “Not Applicable”, and “Peacefully”. It’s a pretty strong collection but sometimes there’s significant mood whiplash when reading straight through the stories. If you like stories about death and how people deal with the concept of death when given concrete evidence of their own mortality, check this out. The kinds of stories are broad enough that even if you don't care for every single story there will likely be one you'll love if you're a fan of existential sci-fi (there are a few fantasy stories as well). Some of the stories have a twist where the military or government can get more information than civilians can about upcoming deaths, or where the patterns in predictions are understood to reveal some broader event. Other stories focus on ways that people grapple with the temptation to try and avert the prediction, to beat the machine, but are unable. Yet still others posit societies where the machine of death is a part of life, not feared or revered but counted on for its surety.

This is a collection where, by definition, there's death either explicitly or implicitly in every story. I liked of them, but there was one where the way racism was handled (“Execution by Beheading”) was very disturbing, and while I’m pretty sure that story’s author was making a point about xenophobia and racism rather than it just being a problematic story, that didn’t make it any easier to read. That’s up to each reader, obviously, but I personally dislike this particular story enough that when I’m reading this book for pleasure instead of to review it I skip it.

The structure of the anthology as a whole works pretty well. I especially like the placement of the first and last stories. "Old Age, Surrounded by Loved Ones" is a truly beautiful way to start the collection, establishing the premise with a heart-wrenching but relatively gentle story (when compared to some of the middle ones). "Furnace" is perfectly placed at the end for the reader to be very familiar with the premise, making the necessary connections quickly after reading dozens of other stories, only to watch the protagonists not understand what's going on in a way that's simultaneously a little bit funny and very sad. 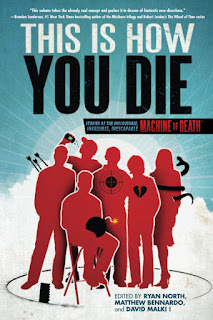