Stories of Your Life and Others by Ted Chiang

Ted Chiang's first published story, "Tower of Babylon," won the Nebula Award in 1990. Subsequent stories have won the Asimov's SF Magazine reader poll, a second Nebula Award, the Theodore Sturgeon Memorial Award, and the Sidewise Award for alternate history. He won the John W. Campbell Award for Best New Writer in 1992. Story for story, he is the most honored young writer in modern SF.

Now, collected here for the first time are all seven of this extraordinary writer's stories so far-plus an eighth story written especially for this volume.

What if men built a tower from Earth to Heaven-and broke through to Heaven's other side? What if we discovered that the fundamentals of mathematics were arbitrary and inconsistent? What if there were a science of naming things that calls life into being from inanimate matter? What if exposure to an alien language forever changed our perception of time? What if all the beliefs of fundamentalist Christianity were literally true, and the sight of sinners being swallowed into fiery pits were a routine event on city streets? These are the kinds of outrageous questions posed by the stories of Ted Chiang. Stories of your life . . . and others.

These stories play with math, language, and science, situating their more technical aspects within various strange and internally consistent rule-sets which stretch into the fantastic while wearing the clothes of the scientific, all to tell deeply moving stories about people in strange worlds which are almost like our own. From a literal interpretation of the Tower of Babel wherein they reach to the heavens, to a mathematical formalism so destabilizing that it drives the theorist to despair, to a contemplation on beauty and appearance which refuses to ever quite take a side on its central question. One of the strengths of this collection is the worldbuilding, the way the details vary from story to story but they're all extremely immersive, exploring the strange corners of each premise while still feeling complete and focused. My favorites were "Tower of Babylon" and "Understand", closely followed by "Story of Your Life" (upon which the 2016 film, "Arrival" is based). Several of them were uncomfortable in a good way, but that experience will obviously vary widely.

Tower of Babylon: CW for death.

Story of Your Life: CW for death (not depicted).

The Evolution of Human Science: No major CWs.

Hell is the Absence of God: CW for bullying (not depicted), ableism, discussion of suicide, major character death, death.

“Liking What You see: A Documentary”: CW for sexism (minor), ableism (minor). 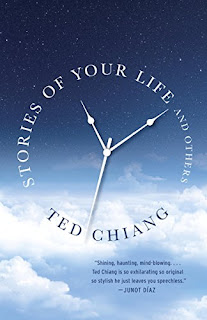