A Song For Quiet by Cassandra Khaw (Persons non Grata, #2)

Deacon James is a rambling bluesman straight from Georgia, a black man with troubles that he can't escape, and music that won't let him go. On a train to Arkham, he meets trouble — visions of nightmares, gaping mouths and grasping tendrils, and a madman who calls himself John Persons. According to the stranger, Deacon is carrying a seed in his head, a thing that will destroy the world if he lets it hatch.

The mad ravings chase Deacon to his next gig. His saxophone doesn't call up his audience from their seats, it calls up monstrosities from across dimensions. As Deacon flees, chased by horrors and cultists, he stumbles upon a runaway girl, who is trying to escape her father, and the destiny he has waiting for her. Like Deacon, she carries something deep inside her, something twisted and dangerous. Together, they seek to leave Arkham, only to find the Thousand Young lurking in the woods.

The song in Deacon’s head is growing stronger, and soon he won’t be able to ignore it any more.

A SONG FOR QUIET feels good to read, the prose and syllabic cadence drips through my brain like a song I know I like but couldn't quite catch. It has a numb and distant feeling, as the MC begins filled with grief over death that happened before the scene starts, and then never quite gets a chance to catch his breath until the end. It describes how music feels to the characters, intertwined with death and darkness, implying the way it sounds to those who have beautiful ways to describe harsh melodies. 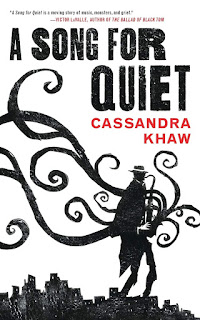