The Legend of the Golden Raven by K. Ancrum (The Wicker King, #1.5)

K. Ancrum's The Legend of the Golden Raven novella, part fairy tale and part gritty reality, follows a boy as he descends into madness.

August and Jack weren’t meant to be friends. One is a misfit with a pyro streak and the other a golden boy on the rugby team. But as their relationship intensifies, Jack slowly begins to lose his mind—taking readers on an intimate journey into the fantasy kingdom creeping into the edges of his world.

As the novella moves back and forth between a medieval legend and our own, contemporary world, nothing is as it seems. The boys alienate everyone around them as they struggle with their sanity and as Jack’s quest to fulfill a dark prophecy begins to consume them both . . .

Devour this companion novella to The Wicker King.

THE LEGEND OF THE GOLDEN RAVEN is queer longing and an epic legend, riding on feelings until the end, bound for beauty or for bitterness, who can say? This is a companion story to THE WICKER KING and should be read after the main novel by those who want Jack’s perspective. Due to the, uh, entire main plot of THE WICKER KING, read this second or you’ll get random spoilers. This is a sequel/midquel novella so I’ll do my usual sequel check. Since it takes place during the events of the first book it doesn't really wrap anything up, but it does give emotional closure for things from the first book. Jack's perspective on the exact same events is so different from August's that it feels like a completely different story in a lot of ways, in addition to literally telling another story within the story, so I think it does have storyline which starts here and wasn't really shown previously, but that's up for debate. It can't stand on its own, it is explicitly part of a larger saga. The MC is different in this one and it's a very different narrative voice from the MC in THE WICKER KING. Finally, this wouldn't make a lot of sense without THE WICKER KING, but it's also not trying to be on its own so that's not a problem. If you’ve read THE WICKER KING, you should read this because it’s wonderful to get Jack’s perspective. If you haven’t read THE WICKER KING, go do that for achillean slow burn longing with best friends trying to help each other even though reality is uncertain and stories are all that’s keeping them going most days... then come back and read this. 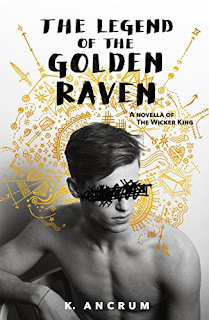