King of the Rising by Kacen Callender (Islands of Blood and Storm, #2)

King of the Rising is the searing conclusion to an unflinching and powerful Caribbean-inspired fantasy series about colonialism, resilience and defiance.

A revolution has swept through the islands of Hans Lollik and former slave Loren Jannik has been chosen to lead the survivors in a bid to free the islands forever.

But the rebels are running out of food, weapons and options. And as the Fjern inch closer to reclaiming Hans Lollik with every battle, Loren is faced with a choice that could shift the course of the revolution in their favor — or doom it to failure.

KING OF THE RISING concludes the story begun in QUEEN OF THE CONQUERED, following a secondary character from the first book while the previous main character stays on in the background. The current MC is one of a small group leading the islanders' revolution against their former masters. There are even more murders and a lot of mystery when compared to the first book, but this one isn't a "murder mystery" in the same way. I'm glad of that, because instead this is a slow burn, nail-biting, tense narrative without the need to try and be a whodunnit when they're literally in the middle of a war. Now, as for what this is: KING OF THE RISING follows the islanders as they turn a night of rebellion into a war for their freedom and the freedom of the Islands. The MC frequently travels to get food and fighters, returning to their island base of operations as morale dwindles and tensions rise.

A lot of the narrative feels bleak and inevitable. I don't think I could have believed an attempt at a happier story, given what was established in the first book. The infighting and tensions feel realistic, and I liked the political wrangling. QUEEN OF THE CONQUERED felt like the MC didn't have room to think beyond her own ambitions, and that misguided focus helped set  up the events in KING OF THE RISING. Here, the MC is focused on trying to save as many people as possible. Rather than have a narrow focus, he's spread too thin, wanting to be a hero but also not wanting anything to go wrong, even though things will and they can't all make it even if they win (which isn't guaranteed). Some of this contrast is explicit in the text, especially when the current and former MC's disagree (which is pretty often). I like this MC a lot better as a person, but they're both great characters. It feels like part of the point is that this isn't the first rebellion and it won't be the last, but it matters. Every bit matters.

Time for the sequel check. This wraps up a lot of things left hanging from the previous book. It has at least one storyline unique to this book, I'm thinking specifically of the attempts to raise guards and the MC's rivalry with a fellow leader in the rebellion. There are things introduced and resolved within this book, but it's definitely part two of a two-part story. As the second book in a duology it wraps up a lot of things and feels very finished. I don't really know what could happen from here if at some point it were turned into a trilogy (though it could be nice to read more books set in these islands, I don't know if I'll be ready for this level of sadness again for a while). The MC is different from the first book and they feel very different in their actions and their motivations, as well as pretty distinct in their narrative voices. Finally, this could mostly stand on its own since it does a pretty good job of getting the reader up to speed without infodumping but it'll make way more sense if you read the first book first.

I feel sad and contemplative, mostly. It's a bleak story of desperate circumstances and a lot of sad endings. It's also worth it. If you've read QUEEN OF THE CONQUERED please pick this up and get the second half of the story. 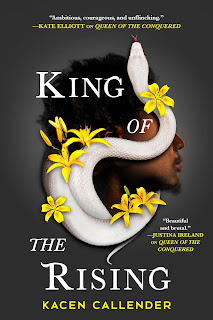