Pet is here to hunt a monster.

Are you brave enough to look?

There are no more monsters anymore, or so the children in the city of Lucille are taught. With doting parents and a best friend named Redemption, Jam has grown up with this lesson all her life. But when she meets Pet, a creature made of horns and colours and claws, who emerges from one of her mother's paintings and a drop of Jam's blood, she must reconsider what she's been told. Pet has come to hunt a monster, and the shadow of something grim lurks in Redemption's house. Jam must fight not only to protect her best friend, but also to uncover the truth, and the answer to the question-How do you save the world from monsters if no one will admit they exist?

In their riveting and timely young adult debut, acclaimed novelist Akwaeke Emezi asks difficult questions about what choices a young person can make when the adults around them are in denial.

PET is about abuse and the shape of justice, because removing monsters requires vigilance. The MC has space to make the wrong decision sometimes and then figure out the aftermath without failure being catastrophic. She has a very strong sense of herself which helps ground the story as she's trying to figure out how to deal with the disturbing disruption to her life which is the main plot. The plot is about child abuse and how a community deals with abusers and enablers, but the text itself keeps most descriptions vague except for a few places where it's very important to be clear about what's going on. I like the way the "no monsters" setup is subverted and examined without making the narrator into a liar. Overall this is a short and cathartic book about communication and justice, with a vibrant MC and really great characterization of secondary and minor characters. 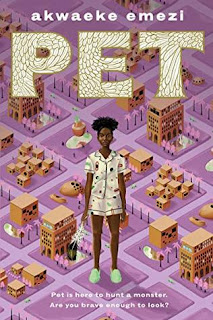