Welcome to the Books That Burn Fortnightly Roundup! Releasing every two weeks (one week early for Patrons). Remember to head to Transcripts That Burn for all available transcripts of the podcast. The newest transcript for our episode discussing THE KINGDOM OF GODS by N.K. Jemisin is now available.

With Twitter's implosion, we've joined Tumblr. Here's the link to the Reviews That Burn Tumblr (where Robin hangs out), and here's the one for the podcast generally (a bit less active).

Reviews forthcoming for BLACK WATER SISTER by Zen Cho, THE LAKE OF SOULS by Darren Shan, and THE SAVAGE DAWN by Melissa Grey.

THE BONE HOUSES by Emily Lloyd-Jones is Fantasy/Horror, with queer character(s), marketed as Young Adult. Ryn agrees to help a mapmaker when the bone houses leave the woods and threaten her home. Told in Third Person with Dual POVs.

THE WHISPERING DARK by Kelly Andrew is Fantasy, with queer character(s), marketed as Young Adult. Delaney is a post-lingual Deaf girl, accepted at a college which teaches people to travel to parallel dimensions. Told in Third Person with Ensemble POVs.

HUNTING GROUND by Patricia Briggs, book 2 of Alpha & Omega is Urban Fantasy/Romance marketed as Adult. Anna and Charles travel to a meeting of werewolves to inform the European wolves of the Marrok's plans to go public. Told in Third Person with Ensemble POVs.

THE GIRL AT MIDNIGHT by Melissa Grey, book 1 of The Girl at Midnight is Fantasy, with queer character(s), marketed as Young Adult. Echo ends up working together with her adoptive family's enemies in an effort to find the Firebird and end their war. Told in THIRD PERSON with Ensemble POVs.

HELL FOLLOWED WITH US by Andrew Joseph White is Sci-Fi/Horror/Apocalyptic, with queer character(s), marketed as Young Adult. Benji is a trans boy raised by the Christian cult which unleased a plague on the world, he escapes after being injected with something which is slowly turning him into a biblically accurate angel. Told in First/Third Person with Ensemble POVs.

BLOOD BOUND by Patricia Briggs, book 2 of Mercedes Thompson is Urban Fantasy/Romance, with queer character(s), marketed as Adult. Mercy repays a favor to Stefan, the vampire, only to become the only one who can stop a very strange vampire on a murder spree. Told in First Person with Single POV.

THE SHADOW HOUR by Melissa Grey, book 2 of The Girl at Midnight is Fantasy, with queer character(s), marketed as Young Adult. Echo is the firebird, and must go after the false Dragon Prince to save her friends. Told in Third Person with Ensemble POVs.

I tried and pretty quickly stopped reading these books:

I wrote formal DNF reviews for MISRULE by Heather Walter and STEALING THUNDER by Alina Boyden.

Nothing to include this time.

My re-read of the Toby Daye books is going well! I slowed down slightly in order to incorporate other books, but I'm still at a good pace.

I'm still re-reading WE COULD BE HEROES by Mike Chen because Hench reminded me how much I like twists on superhero stories.

For 2022 I'm hosting a reading challenge that lasts the whole year. December's prompt is to read something by a Black author. Our patrons voted for QUEEN OF THE CONQUERED by Kacen Callender. You can find my review at this link.

I'm still reading VOLARIA by M.D. Neu, I got a bit distracted by trying to read more physical copies (I have this as an ebook).

This time last year I read the novella, COMFORT ME WITH APPLES by Catherynne M. Valente. It's a story of trouble in paradise and I love the ending.

As for the podcast, hopefully you're enjoying our most recent episode, PORTRAIT OF A THIEF by Grace D. Li, as well as the first half of our interview with author Seanan McGuire (AKA Mira Grant, A. Deborah Baker), released in January. If you'd like to receive the second (spoiler-filled) half of the interview, please consider supporting us on Patreon. Patrons receive this newsletter one week early, as well as a list of upcoming podcast episodes for the next three months. 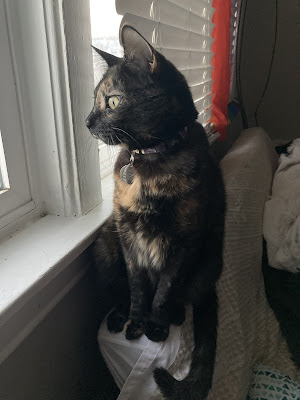