Cerise Mar and her clan are cash poor but land rich, claiming a large swathe of the Mire, the Edge swamplands. When her parents vanish, her clan's long-time rivals are suspect. But all is not as it seems.

Two nations of the Weird are waging a cold war fought by feint and espionage, and their conflict is about to spill over into the Edge-and Cerise's life.

William is a changeling, raised to be a killing machine by a kingdom that sees him as  a subhuman tool. The Mirror sends him as a spy to retrieve some information from the Mire, and to kill Spider, an agent of the Hand who has a personal mission to kill all changelings. On the way he meets Cerise, a member of the Mar family whose dormant feud with the Sherile family has been restarted with some help from the Hand.

I like Cerise and William as the main narrators. Their attraction is present early, but it takes most of the book before they're able to hit the right combination of decisive and vulnerable to do something more long-term about it.

As a sequel, BAYOU MOON follows William, a secondary character from ON THE EDGE. Other than answering very briefly how Rose and Declan are doing, it doesn't try to wrap up anything from the first book. It's an entirely new storyline, with the entire plot as a pile of major things that are introduced and resolved. It gives the characters a new status by the end, one which doesn't require major updates unless they have another adventure in the series. It's not trying to leave things for later (other than that the character may appear in future books), and ON THE EDGE didn't leave much for BAYOU MOON to wrap up. It seems to tease the possibility of future updates on the kids (Jack and George from the first book, plus Lark and Gaston from this one), but wouldn't require them.

This time the main narrators are William (a secondary character from ON THE EDGE) and Cerise. William’s narration is consistent with how he was as a mostly non-POV character in the first book. It could mostly make sense to start here. Extremely basic worldbuilding details are shown rather than explained as much as in the first book, but they also aren't as big of a deal this time around since most of the plot stays in the Mire (a region of the Edge).

Changelings have difficulty understanding social situations, don't understand lying, and have a whole bunch of other mismatches with the rest of society that add up to make them feel like an allistic portrayal of autistic people (albeit ones who can turn into animals). I don't think this is necessarily on purpose, but choosing the term "changeling" makes the parallels harder to dismiss. Whether or not this parallel is on purpose, I appreciate that William is one of the main point-of-view characters, as it means his differences in processing are shown as a coherent whole that (combined with his specialized military experience) is a different way of thinking about things rather than just being viewed from the outside as him having trouble understanding things. There's a great balance between where he excels and where other people have trouble seeing his perspective.

The plot feels even more convoluted than ON THE EDGE. In BAYOU MOON, Cerise and the Mars have a specific goal (kick the Sheriles out of her grandparents house), Spider and the Hand have a reason for their operation (trying to get access to something one of the Mars developed), and the Sheriles are trying to restart the feud (by taking a house). William is sent into this by the Mirror (an organization who wants him to retrieve whatever the Hand is trying to get, but do it first), and along the way he and Cerise start falling for each other. Cerise has so many relatives, many of which are named and distinctly characterized, and Spider's group is full of modified operatives whose mutations are described at length (even if only at the moment of death). Each of the goals I've already mentioned have either a lot of steps to get there (like torture for information) or gain extra steps after the first goal is met and they have to keep dealing with another group that's in play. It took several re-reads before I felt like I have a handle on all the moving pieces (ON THE EDGE had this tendency a little, but in BAYOU MOON it starts to be a problem for people like me who are bad at remembering character names).

I like most of the characters (I need more Kalder in my life), but the plot is very convoluted and feels off-putting even though I've read it before. I recommend it as part of The Edge series, for a wonderful amount of William and the introduction of Cerise, but it's not my favorite in the series. It 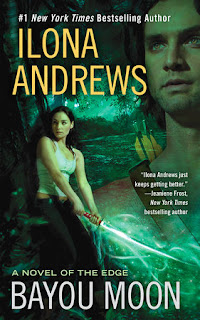