Audrey Callahan left behind her life in the Edge, and she's determined to stay on the straight and narrow. But when her brother gets into hot water, the former thief takes on one last heist and finds herself matching wits with a jack of all trades...

Kaldar Mar-a gambler, lawyer, thief, and spy-expects his latest assignment tracking down a stolen item to be a piece of cake, until Audrey shows up. But when the item falls into the hands of a lethal criminal, Kaldar realizes that in order to finish the job, he's going to need Audrey's help...

Kaldar leaves with Gaston on a job for the Mirror, but things get complicated when Jack and George stow away on the wyvern. They track down Audrey, a thief who's trying to leave her conning family behind and go legit, but got tangled up in one last job that ended up involving the Hand.

Jack is in the rotation of point-of-view characters this time, and it's nice to see him a littler older and trying to figuring out being a teenage changeling. Kaldar is a rogue, and the way he and Audrey play off of each other during the job is just wonderful. This builds off of the world in the first two books, but mostly takes place on the west coast in an entirely separate zone of the Edge.

By following Kaldar and having Jack, George, and Gaston as central characters, this continues some character development which was left open at the end of the previous books. It also addresses the Hand's next steps after the conflict in BAYOU MOON. The main storyline is entirely new, bringing in the Hounds and various other entities who didn't appear in earlier books. Kaldar and Audrey's relationship is introduced and resolved, as is the particular mission that Kaldar was sent on. As with the previous books, this doesn't specifically leave anything hanging except for the possibility that these characters will have other missions later if there are more books. George in particular might be involved more in the future. The returning characters, like Kaldar, are consistent with their previous appearances (though Jack and George have definitely grown up). It might make sense to start here since what matters is explained enough to be understandable (and the plot is way more straightforward than BAYOU MOON's complicated tangle of a story). Anyone who skips the first two books would enter FATE'S EDGE more in Audrey's position (and hopefully would pick up on what the Edge is quickly enough to not be lost).

The plot revolves around gathering information and then retrieving a stolen object, with a detour to con a prosperity preacher in the middle. I love the focus on heists, cons, and grifting which make this a slightly less bloody story than BAYOU MOON. The dynamic between Kaldar and Audrey steals the show, but Jack does get a chance to develop more on-page now that he's also a main character. He and George do a great job with the con, and Gaston is a steady presence who mostly supports Kaldar's plans since he's there to learn. 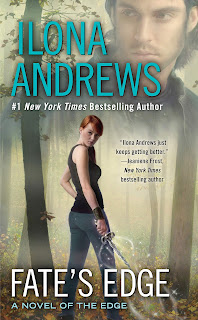