On The Edge by Ilona Andrews (The Edge #1)

The Edge lies between worlds, on the border between the Broken, where people shop at Wal-Mart and magic is a fairy tale--and the Weird, where blueblood aristocrats rule, changelings roam, and the strength of your magic can change your destiny...

Rose Drayton thought if she practiced her magic, she could build a better life for herself. But things didn't turn out the way she'd planned, and now she works an off-the-books job in the Broken just to survive. Then Declan Camarine, a blueblood noble straight out of the deepest part of the Weird, comes into her life, determined to have Rose (and her power).

But when a flood of creatures hungry for magic invade the Edge, Declan and Rose must overcome their differences and work together to destroy them--or the beasts will devour the Edge and everyone in it...

Rose lives in the Edge, a low-magic zone between the Broken (no magic) and the Weird (full magic). She's spent the last several years fighting off attempted kidnappers after she showed the strength of her Flash at her graduation. Rose is barely an adult, raising her two brothers with the help of her grandmother after being abandoned by her parents. There's a lot of focus on her providing for the boys, and the tension between various needs and wants when just simply having more money available would solve most of it. Then in comes Declan, a noble who has a mission in the Edge. Even then, he's paying her in currency from the Weird, so what is to Rose an enormous amount of money must even then be converted into Broken currency, anchoring that fantasy with her ongoing reality that if she stumps Declan in the challenges and he leaves, this shower of funds is going to disappear. Rose and Declan's relationship begins with a major misunderstanding, but because of the way it happens it doesn't feel like a standard misunderstanding narrative. The trajectory of their relationship fits them as people and I'm very happy with the ending.

The worldbuilding is generally well done (with one major exception that I'll discuss next). The people of the Edge, in particular, are described in ways that explain this community as a tumultuous whole. The way the magic works, the little we know of the Weird, why people would live in the Edge, and how they interact with the Broken all make sense a choices that groups and individuals would make given the broader context.

There's a worldbuilding detail that many things which happened in the Broken happened in an opposite manner in the weird, and this includes one instance of which continent invaded the other. In the Weird, the indigenous people of what we would call the North and South America were the ones which invaded what we could call Europe (and possibly other continents, but it's hard to tell from the text). Then a thing happened as a result of their magic gone wrong which almost completely wiped them out, and when the not-technically-Europeans eventually found their continent they were much less advanced than they had been. As a worldbuilding detail it feels like a complicated way to use the idea of indigenous people without actually having them be present, and I find it troubling. Because the people in the Weird know about the Broken and a fair bit of (our) history, it means that even their telling of this story in that fictional universe has the context of what happened in our reality. The end result is that the indigenous people mostly gone and literally primitive when the not-Europeans show up, having lost a lot of their own previous knowledge, making our reality's settler propaganda real in this fictional setting.

Ultimately, I do recommend this book, despite that worldbuilding issue. The characters are well-written, I adore the boys, and Georgie's storyline has stayed with me for years. Jack's existence shows what William's situation could have been, and what it ought to be in the Weird for changelings. 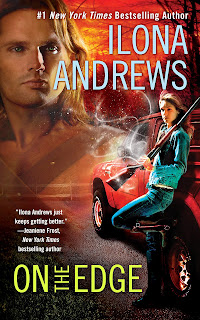