A paladin, an assassin, a forger, and a scholar ride out of town. It’s not the start of a joke, but rather an espionage mission with deadly serious stakes. T. Kingfisher’s new novel begins the tale of a murderous band of criminals (and a scholar), thrown together in an attempt to unravel the secret of the Clockwork Boys, mechanical soldiers from a neighboring kingdom that promise ruin to the Dowager’s city.

If they succeed, rewards and pardons await, but that requires a long journey through enemy territory, directly into the capital. It also requires them to refrain from killing each other along the way! At turns darkly comic and touching, Clockwork Boys puts together a broken group of people trying to make the most of the rest of their lives as they drive forward on their suicide mission.

Bleak and humorous, CLOCKWORK BOYS follows three convicted criminals and a scholar sent to find out what they can about the terrifying and murderous "Clockwork Boys" who have been devastating their towns and villages.

As a journey narrative, CLOCKWORK BOYS focuses on the dynamic between the members of the party, as well as the internal struggles of the two point-of-view characters. Slate is a forger, Brenner is an assassin, Caliban is a paladin who has a dead demon rotting in his skull, they're on this trip in hopes of a pardon if they survive. Learned Edmund is a formerly cloistered misogynist from an order who prizes learning and instills a fear of mere proximity to women. There's a mix of genuine character growth and learning each other's edges, the kind of forced intimacy which is fostered by a suicide mission with terrible travel conditions in the middle of a war. The worldbuilding is conveyed through a mix of exposition, character reactions, and things encountered as they travel. Slate and Caliban think about themselves and their companions, often thinking things they don't dare or don't know how to say out loud.

CLOCKWORK BOYS ends on a cliffhanger, as the characters joined together and undertook a journey to a particular city, and the narrative abruptly ends when they arrive at their destination. The story is continued in THE WONDER ENGINE. Since it's the first book in a duology, it doesn't completely tie off anything before it ends, except perhaps that stage one of the plan (the journey there) is done and what remains is entering the city and maybe surviving (maybe not). The characters have been changed by the journey, now it remains to be seen whether they'll survive their destination.

I loved this and am excited to read the sequel! 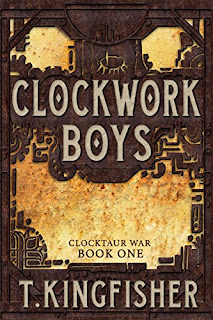