Luck in the Shadows by Lynn Flewelling (Nightrunner #1)

This first installment in the Nightrunner series is brimming with magic and intrigue. When young Alec of Kerry is taken prisoner for a crime he didn't commit, he is certain that his life is at an end. But the thing he hadn't counted on was his cellmate. Spy, rogue, thief, and noble, Seregil of Rhiminee is many things--none of them predictable. And when he offers to take on Alec as his apprentice, things may never be the same for either of them. Soon Alec is traveling roads he never knew existed, toward a war he never suspected was brewing. Before long he and Seregil are embroiled in a sinister plot that runs deeper than either can imagine and that may cost them far more than their lives if they fail. But fortune is as unpredictable as Alec's new mentor, and this time there just might be luck in the shadows.

LUCK IN THE SHADOWS is a slow burn series of heists and cons carried out in the name of spywork and finding out the truth of a murderous conspiracy as Alec slowly gets to know Seregil, his enigmatic rescuer, and the rest of his comrades.

Much of the story is Seregil introducing Alec to people and places. The reader is constantly in Alec's position in terms of information, as Seregil is pretty cagey about most things. He has a lot of secrets and is good at keeping them. I like the group who eventually emerge  as the main point-of-view characters in addition to Alec and Seregil.

A lot of the worldbuilding is in the form of stories exchanged on the road, and explanations to Alec as he's being introduced to new situations (usually but not only with Seregil doing the explaining). For as much as Alec is being bombarded with new people, places, and information, for the reader each individual explanation is very low stakes. You don't need to remember everything Seregil said in order to understand the general flow of the story. I love books driven by banter, exploration, and heists, so this was a perfect balance for me.

One little thing which was frustrating is that a pair of shady characters are described in terms of their large size and relative lack of intelligence in ways that seemed designed to make it clear that they weren't the masterminds of the nefarious acts they were involved in. Since few other characters were described in terms of body type, it stood out as unusual in addition to being fatphobic and ableist.

I didn't have much of a sense of where the story was headed until about halfway through. The story begins when Seregil and Alec, strangers to one another, are both imprisoned and Seregil breaks them both out. They begin by traveling in the general direction of Seregil's home, but along the way Seregil becomes ill and Alec has to get them the rest of the way while trying to keep Seregil alive. Once they arrive, Alec becomes immersed in Seregil's world of magic and cons as Seregil continues his education. The focus of the story is on the relationships between the characters, with any one activity feeling incidental much of the time. Along they way they start tryin to get to the bottom of a murderous political conspiracy which falsely implicates Seregil, trying to find the true perpetrators and clear Seregil's name.

I had a great time reading this and intend to continue with the series. Because of the slow pacing, a lot of my favorite things are mid- or late-book spoilers. The world and characters clearly have a lot more to offer and I'm excited to see where things will go from here. 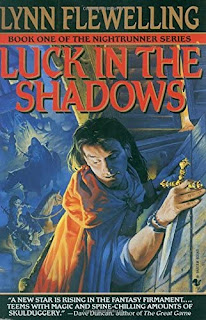