The Savage Dawn by Melissa Grey (The Girl at Midnight #3)

The war between light and dark has begun. The sides have been chosen and the battle lines drawn.

After awakening the firebird, Echo is now the only one with the power to face the darkness she unwittingly unleashed upon the world…right into the waiting hands of Tanith, the new Dragon Prince. Tanith has one goal in mind: destroy her enemies, raze their lands, and reign supreme in a new era where the Drakharin are almighty and the Avicen are nothing but a memory.

The war that has been brewing for centuries is finally imminent. But the scales are tipped. Echo might hold the power to face the darkness within the Dragon Prince, but she has far to go to master it. And now she’s plagued by uncertainty. Is she strong enough to stare into the face of evil and not lose herself in its depths?

The war has begun, and there is no looking back. There are only two outcomes possible: triumph or death.

THE SAVAGE DAWN is the mediocre ending to an okay but enjoyable trilogy.

Caius is around two hundred years old and Echo begins this book at seventeen, but turns eighteen partway through. They're already dating (as part of what was formerly a mess of love triangles), with Rowan as Echo's ex-boyfriend but still close friend. Dorian is working on letting himself admit that he loves Jasper now that Caius is firmly out of reach and Jasper's ex, Quinn, has been booted.

I guess Quinn the Warlock was around in THE SHADOW HOUR precisely long enough to do one thing and then get kicked out, which seems to be for the best. This means that instead of Julian being stalked by Quinn, the barrier to Dorian and Julian getting together is Dorian's stubbornness and sorting through the change in how he feels about Caius. Quinn shows up one time in THE SAVAGE DAWN, but it feels extremely perfunctory, just enough to stop him from being a one-book-wonder.

There's more worldbuilding this time around. There's still a lot of character work, but this finally delves into a bunch of details that have been previously unaddressed. The first two books were short on plot and long on love triangle angst, but this has a lot more things happen while it's resolving the various relationship tangles. Of particular note is a scene which introduces a never-before-seen group of creatures whose sole narrative purpose is to force Dorian to get over himself and recognize that he’s in love with Jasper. It feels like the author tried to do more worldbuilding this time, but because there weren't solid previous layers as a foundation it feels more like "oh that thing exists too" rather than being integrated into this series of complex hidden societies that no humans have found before now.

Perhaps most emblematic of the way this series prioritizes character moments over worldbuilding is when Echo finds out that the Ala has (between scenes, with no setup for it) revealed their existence to humans and now has a military force helping her, ready to go against Tanith. This is handwaved away immediately. "A more detailed explanation for the impossible logistics of what had transpired in her absence could wait. There were more pressing matters to attend to. And so long as she wouldn't have to dodge bullets while staging a rescue mission that was also an assassination, Echo found she didn't much care how it had come to pass that the Avicen were working alongside the human military." Echo doesn't care, so we don't find out.

There's a small moment where they discover that Tanith used her blood to open something and Caius proposes trying to use his blood to fix it it because "...Tanith is my twin. Our blood is identical." They almost immediately try it and it works. This implies that perhaps one of the following is in play: Caius doesn't know about DNA (a distinct possibility); either Caius or Tanith is trans (exciting if true, but otherwise unsupported by the text); that the Drakharin are closer to reptiles than known previously and maybe they have temperature-determined sex characteristics (I'm definitely rooting for that one); or (likely, but boring) that the magic doesn't actually need them to be identical, just close enough. Since Tanith's blood is polluted by magic and Caius's isn't but his attempt works anyway, I'm pretty sure it's the last option. It's a very brief scene but it fascinates me because it implies a bunch of things that are way more interesting than what actually happens.

A subtle but slightly frustrating thing was the way identical or nearly-identical phrases would be used in more than one place as if conveying information the reader didn't have yet. Except on subsequent uses, it's information the reader definitely does have and which doesn't need to be repeated like that. One memorable instance was when discussing the topic of Echo's birthday, but it's not the only time. It's a small thing, but it made me check to see if the audiobook had suddenly jumped back the first time I noticed it (it had not, everything was fine). Some of these phrases repeated within the book, and some are ones I could swear appeared in one of the first two books.

In my review of THE SHADOW HOUR I noted that someone (often Caius or Echo) would just randomly know a thing that they needed in order to do something for the plot. That's still happening, and was most egregious when Caius remembered exactly what something looked like from having seen the drawing one time when looking at a random book that he just happened to skim a long time ago. I guess by now it's just established that Caius must have an eidetic memory or something, but it only comes up when the plot needs him to have the information so it feels extremely coincidental rather than it being that he has an excellent memory. To be precise, I find it weird that he's constantly happened to study exactly the obscure old language just a bit that they run across, enough to translate random script, despite specifically not having studied it seriously. It make it feel like his two hundred year history is used to fix plot holes, rather than being a genuine well of diverse and interesting experiences from a being working on his third century.

As the final book in the trilogy, this is okay but not great. It wraps up some relationship things left hanging, but it's so character-focused that the main thing left for it to wrap up is what happened to Caius after he was kidnapped, and how they'll stop Tanith and the shadow thing. Everything else is an answer to who is dating whom, and that's such a fluid thing that "wrap up" isn't the right term for what's going on there. I can't think of anything specific that it both introduces and resolves, except maybe the fate one a random human soldier in the big battle, and I don't think that counts. The rotating cast of point-of-view characters continues, but I'm actually pretty fuzzy on which ones have and have not been narrators at some point in the trilogy. I know Caius and Echo have been from the start, but I'm not sure for everyone else. Honestly, I was able to tell them apart thanks to the excellent audiobook narrator, I don't think everyone's dialogue was distinctive enough to be sure without that.

This would not make sense if anyone started here and hadn't read the previous books. Worse, it would give a false impression of the complexity of the first two if anyone tried. This dumps a lot of lore, out of nowhere, and only some of it matters. Additionally, it rehashes previous emotional beats in a way that would be very confusing for someone just entering the series. It's a mediocre enough read that I'd only recommend it to someone who loved the first two and wanted the conclusion, it's definitely not great enough to stand on its own without them. As the third book of the trilogy, that's not a bad thing necessarily, but I don't mean it in a good way this time.

The plot is a mess of kidnapping and following clues. I'm fuzzy on what actually happens because it repeats a lot of plot beats from THE SHADOW HOUR, with less love triangle stuff, and then adds in a gigantic battle which should have felt epic but instead feels like two armies fight off-page while the main characters angst at each other. Rowan is just Echo's friend rather than acting like an ex-boyfriend, for the most part, which is fine but a little undone by the ending.

This sure is a book I read, and now it's over. 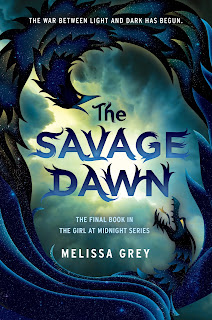