The Very Secret Society of Irregular Witches by Sangu Mandanna

A warm and uplifting novel about an isolated witch whose opportunity to embrace a quirky new family—and a new love—changes the course of her life.

As one of the few witches in Britain, Mika Moon knows she has to hide her magic, keep her head down, and stay away from other witches so their powers don’t mingle and draw attention. And as an orphan who lost her parents at a young age and was raised by strangers, she’s used to being alone and she follows the rules…with one exception: an online account, where she posts videos “pretending” to be a witch. She thinks no one will take it seriously.

But someone does. An unexpected message arrives, begging her to travel to the remote and mysterious Nowhere House to teach three young witches how to control their magic. It breaks all of the rules, but Mika goes anyway, and is immediately tangled up in the lives and secrets of not only her three charges, but also an absent archaeologist, a retired actor, two long-suffering caretakers, and…Jamie. The handsome and prickly librarian of Nowhere House would do anything to protect the children, and as far as he’s concerned, a stranger like Mika is a threat. An irritatingly appealing threat.

As Mika begins to find her place at Nowhere House, the thought of belonging somewhere begins to feel like a real possibility. But magic isn’t the only danger in the world, and when a threat comes knocking at their door, Mika will need to decide whether to risk everything to protect a found family she didn’t know she was looking for….

THE VERY SECRET SOCIETY OF IRREGULAR WITCHES is a funny and heartwarming story of found family, starring a lonely witch and a house full of people working to protect three very young witches.

The setting is almost real-world England, but where magic and witches are real while the rest of history seems to have been unaffected. Mika was born in India but was taken to England by Primrose after her mother died (all witches are orphaned soon after birth due to a spell that went wrong sometime in the past). There are various themes of bigotry, marginalization, and even colonialism which are invoked by the characters, but only the magical counterpart is specifically explored. Since a lot of heavy lifting for the worldbuilding is implied by the contemporary setting and setting most of the book at Nowhere House, this has the room to focus mainly on characterization.

Ian is a retired actor who resides at Nowhere House with Ken, his husband and the house's gardener. Lucie is the housekeeper, and Jamie is the grumpy and protective librarian who originally came to the house as a teenager. The children (Altamira, Terracotta, and Rosetta) are very young witches who were adopted by the house's absent owner, Lillian, a witch and archeologist. Ian finds Mika online and invites her to stay at the house for several months and teach the children to control their magic. Mika, who has led a very lonely life due to her former guardian's ideas about witches and the dangers of spending time with one another, agrees to stay but keeps feeling a bit on the outside.

The story is generally heartwarming, focusing on Mika's interactions with the inhabitants of the house. Jamie is grumpy in a way that's initially annoying to Mika but which starts being a bit sexy as she gets to know him better. Mika was invited to the house because there's going to be a visit from Lillian's lawyer and they need the children's magic to be under control (or at least hidden) during the event. They haven't been able to get in touch with Lillian, and none of the other adults are magical, so they have to hope that Mika can help them.

This was fluffier than I usually like, but I ended up enjoying it (especially once Jamie and Mika start really talking). The late-book twist was handled very well and led to some of my favorite scenes in the whole thing. 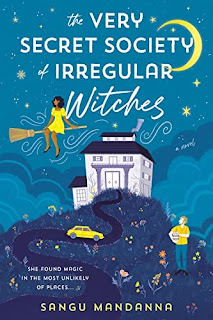