Halla is a housekeeper who has suddenly inherited her great-uncle's estate... and, unfortunately, his relatives. Sarkis is an immortal swordsman trapped in a prison of enchanted steel. When Halla draws the sword that imprisons him, Sarkis finds himself attempting to defend his new wielder against everything from bandits and roving inquisitors to her own in-laws... and the sword itself may prove to be the greatest threat of all.

Halla is a widow who has inherited her uncle's fortune, whereupon her aunt and brother-in-law have locked her in her room until she agrees to marry him. He has an odious personality and clammy hands, and seemingly no understanding that locking a woman in a room until she agrees to marry you is a very terrible start to any kind of relationship. When she decides that death is better than her upcoming fate, she tries to kill herself with a sword that turns out to have Sarkis, an immortal swordsman, trapped inside. Together they escape and attempt to get help for Halla's legal troubles and grasping relatives.

SWORDHEART is one of the funniest books I’ve read recently, and the main contenders for that honor are other White Rat books by this same author. It’s vibrant without requiring the characters to constantly be witty, the whole thing is a delight. It’s a fluffy romance in desperate circumstances, buoyed by Halla’s never-stymied open nature and endless optimism, and tempered by Sarkis’s practicality. Halla uses prattle, questions, and observations as a multi-purpose tactic on a near-constant basis. Sarkis is trapped in a sword and is unfamiliar with current customs of Halla’s home, creating a natural ebb and flow of competency and possession of relevant information at any one moment. Zale is a welcome addition to their party, a temple lawyer acquired to help with Halla’s legal tangle, and Brindle rounds out their party by taking care of the ox and cart.

SWORDHEART is not technically a sequel, it is a stand-alone book. However, it takes place in the world of the White Rat approximately five years after the events of CLOCKWORK BOYS and THE WONDER ENGINE. It contains details that blur the line between callback and spoiler, I think they’re suitably opaque as to keep from giving away major plot points of that duology, but I do recommend reading this after the duology for the best overall experience. The worldbuilding seemed complete enough to stand on its own, someone reading just SWORDHEART would know everything they need to. It is focused on different aspects than in the earlier duology, complementing the prior information without feeling redundant. Because Sarkis is from another land it also helps to establish the patchwork of kingdoms and territories in this part of the world.

I had a fantastic time reading this and I'm looking forward to more books set in this world. 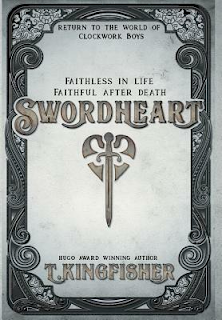