Be The Serpent by Seanan McGuire (October Daye #16)

October Daye is finally something she never expected to be: married. All the trials and turmoils and terrors of a hero’s life have done very little to prepare her for the expectation that she will actually share her life with someone else, the good parts and the bad ones alike, not just allow them to dabble around the edges in the things she wants to share. But with an official break from hero duties from the Queen in the Mists, and her family wholly on board with this new version of “normal,” she’s doing her best to adjust.

Until an old friend and ally turns out to have been an enemy in disguise for this entire time, and October’s brief respite turns into a battle for her life, her community, and everything she has ever believed to be true.

The debts of the Broken Ride are coming due, and whether she incurred them or not, she’s going to be the one who has to pay.

*BE THE SERPENT contains the novella SUCH DANGEROUS SEAS, which comprises the final forty or so pages of the book as published.

As the sixteenth book in a long-running series, BE THE SERPENT represents a new status quo. The change from Simon as a villain to someone in the process of healing was teased in NIGHT AND SILENCE, established in A KILLING FROST, doubled down upon in various short stories, and confirmed in WHEN SORROWS COME during Toby's wedding. This span also is responsible for Rayseline Torquill's current condition and the request which kicks off BE THE SERPENT. Her elf-shot slumber and former misdeeds need to be addressed in a way that leaves her room to get better now that her blood is no longer fighting within her. Once that's addressed, there's a new storyline which, while some aspects of it were teased in the previous several books, has its inciting incident within these pages. The main storyline features several things which are introduced and resolved, plus a very stressful cliffhanger and final pages which promise a very interesting start to the next book. This is definitely not the end of the series, and it explicitly leaves several things (beyond the cliffhanger) which future books will need to address.

Toby is still the narrator and (except for moments related to the ending) her narrative voice is consistent with how she's been recently. It could make some sense to start here, but I think a more satisfying sequence for anyone planning a partial re-read of the series would be to start either with NIGHT AND SILENCE or A KILLING FROST as a lead-up for Rayseline's current condition and recent changes in the Brown household. Perhaps once more of the series is available, BE THE SERPENT will be a new landing spot for reading forward from this book's main attack and its aftermath, but it keeps enough of a focus on healing from previous plot arcs that I'm reading it more in that light for now. For a completely new reader I recommend starting the series from the beginning with ROSEMARY AND RUE, but I recognize that this may be a bit daunting and I'd direct you as far back as NIGHT AND SILENCE at minimum. That will include certain relationships as they were previously understood to be, and let a particular combination of revelations and personal growth be satisfying by the time such a reader reaches BE THE SERPENT.

The worldbuilding leans on what's been long-since established, explaining things which are new, extremely relevant, or turn out to be other than what was assumed. There are asides to explain things when necessary, especially as they relate to Toby's understanding of a situation and what she thinks is important.

The plot begins with the hearing for Rayseline Torquill, and Toby's promise to claim offense against her and have her stay with Toby rather than her parents for a year. That's barely handled when something terrible happens at Stacy Brown's house, and Toby must try to save the rest of her family. The ensuing conflict is gripping and well-paced, with just the right amount of tension. The central premise is a massive spoiler which is excellently handled, but nonetheless makes any further discussion of the plot a bit tricky. This focuses on Toby's and Tybalt's handling of the crisis, letting many in their extended family be in other rooms fighting other parts of the battle for long sections mid-book. I like the focus on the two of them as this is the first book set after their wedding, seeing how they navigate Toby's heroism together. It creates a feeling of everyone being near and relevant, but not constantly in every scene.

I'm glad it's finally dealing with the mess Oberon left, and in a way that tries to call him to account for his decisions. That seems like it'll be a long process and I'm looking forward to how the series unfolds from here. 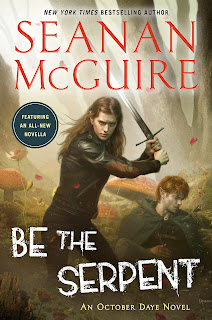