Lord of the Shadows by Darren Shan (Cirque Du Freak #11)

Darren Shan is going home-and his world is going to hell.

Darren is going back to where it all started, back to where he was reborn as a child of the night. But like Darren, the town has changed a lot over the years. Back home, old enemies await. Scores must be settled. Destiny looks certain to destroy him, and the world is doomed to fall to the Ruler of the Night.

Travel home with Darren in this, the penultimate book in the saga.

As the penultimate book in the series, this returns to Darren's hometown to answer what happened to his family after he died. He also learns what happened to his friends, since around twenty years have passed by now and they've more than grown up. There's kind of a new storyline related to the people who visit the Cirque and what happens there, but even that ends up being a way of tying up loose ends. Darren has changed a lot since the first book but he's pretty consistent with the most recent ones. It would not make sense to start here as this book is all about addressing answers to old questions and beginning the final confrontation which will determine the identity of the Lord of the Shadows.

The plot focuses on Darren dealing with being back home, and how much he dips into his old life (or not). The way he navigates the temptations of being home shapes what happens next. Darren's body also begins the final transformation from half-vampire to full vampire, which will mark the physical severing of his few remaining ties to humanity. A lot of the story doesn't make sense without earlier context, or it's specifically a "where are they now" conversation scene. All of it makes sense for the penultimate book of such a long series, but means that the only interesting things to discuss are major spoilers (of which there are several). There's a very dramatic kidnapping and a cliffhanger which shakes Darren to his core, so I'm excited to get to the finale and see how it all turns out. 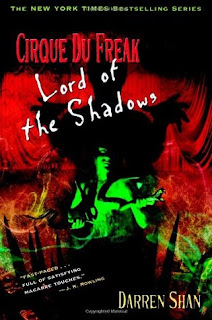