Dead if he loses - damned if he wins. The time has finally come for Darren to face his archenemy, Steve Leopard. One of them will die. The other will become the Lord of the Shadows - and destroy the world.

Is the future written, or can Darren trick destiny?

SONS OF DESTINY is the final showdown between Steve and Darren, as they both learn who set them in the other's path.

This wraps up Darren and Steve's conflict with a final confrontation. It addresses some of what happens to the other characters afterward, but only in brief detail. It kind of has a new storyline about what happens to Darren after the conflict, but that's so much of a continuation/redo that I'm not sure whether it counts as a new storyline. It introduces and resolves Darren's transformation. As the final book in the series it wraps up Darren's personal storyline as well as a smattering of other plot threads. Darren is still the narrator, as he has been for the whole series.

It would not make sense to start here, not only is this the final book but it revisits some early events from an altered perspective. To read this without having read any of the others would be a pile of massive spoilers which would be in danger of feeling anticlimactic because they lacked context. The book starts with a concise and useful summation of the series so far, but that's more useful for those who waited a while between reading the other books and this one, and would most likely be insufficient context for anyone who tried skipping the others and just reading this.

The plot picks up where LORD OF THE SHADOWS left off, with Darren and Vancha figuring out what to do with Darius and dealing with Steve's actions at the end of that book. It packs an incredible amount of incredibly spoilery worldbuilding and character work into a very small space, with a villain speech which ties things together with brutal clarity, all the way back to the start of the series. The second part of the book is devoted to the aftermath of the violent clash. The ending is the reason I wanted to re-read this series. I loved it as a kid and I'm so glad it mostly held up now that I'm an adult. It's not the only series that has this kind of finale, but it does it very well and it was the first such ending I'd read. 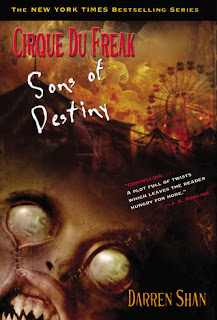